The Happiest Day of the Year

This year, more than ever, people seemed to be glad of a new start. Whether it was the financial hardships of the last year, the long slog of Christmas, the exceptionally poor weather, or something else, the "seasonal depression" that kicks in at this time of year seemed particularly pronounced. People returned to work and school yesterday with a mix of relief and resignation.

Then, last night, the snow came back down, and everyone in the North - and probably other parts of the country - woke up to a blanket of snow; knowing full well the council's would by now be running out of grit, and that the general daily slog that is the commute into work in this country, was going to be worse than ever. I was off this week already, and would probably have made it in if I'd been working, but according to Twitter pretty much everyone outside the M60 gave up after trying to get past their gate, down their hill, or catch their connection.

Then something happened. Who amongst us can forget those seventies childhood days when school was cancelled and we had an unexpected day off - and if it was the snow that had caused it like today then not only a day off but the whole world turned into a playground. And, for once, childcare's not an issue, as mum and dad can't get into work either. The council's asked everyone not to travel unless it's "essential" and for who amongst us is work really essential? Especially one day back in, knowing that all the meetings you might be planning for later would also be cancelled as the whole country judders to a halt.

Instead, I popped out to Didsbury, and kids were out on their sledges, adults were wrapped up warm. After a couple of weeks when the pedestrian has taken second place to the car, today it was the car and bus that was noticeably absent, and walking in the deep powdery snow that fell last night, the only thing to do was to walk to the local shops, say hello to the neighbours and take photographs of the seasonal beauty. Parsonage Gardens in Didsbury looks like a film set for Narnia, with the ice queen centre stage. Forced to stay at home, and advised not to get in their cars, the world suddenly seemed a happier, more joyous place. Certainly, some people were working, and working hard. A Barbakan bakery van from Chorlton was driving slowly down Wilmslow Road so that the poor people of Didsbury wouldn't starve for lack of specialist Polish bread; by lunch time even the buses were beginning to return to the slush-heavy roads.

Let's be honest, though there have surely been some hardships; the odd pub running out of its specialist ale, a guacamole shortage around Chorlton Green, a delay in Avatar 3D becoming the biggest grossing film ever; for most of us, today must surely be the happiest day of the year. 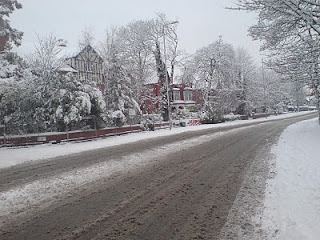 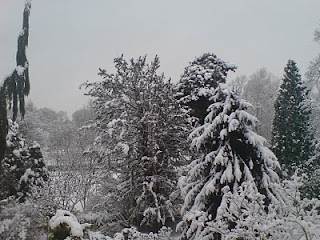 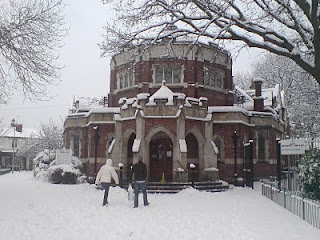 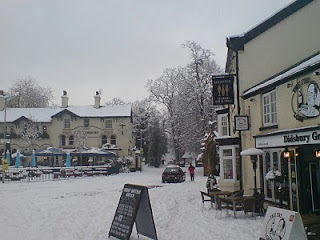 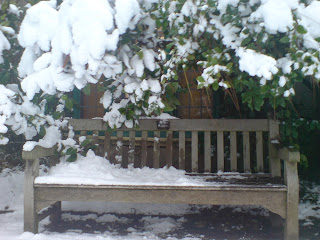 Posted by Adrian Slatcher at 5:10 AM