The Cult of Beauty 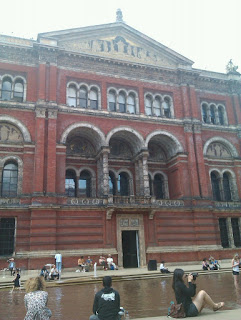 Our relationship to the Victorians is always an intricate one. We still live in and love many of their houses; we are sniffy about "Victorian values"; we have a Commonwealth when once we had an Empire. Victoria was on the throne for so long, however, that it is the later part of her reign that we are seeing in our minds-eye when something is described as "Victorian." Yet Albert died in 1861, and the museum that bears her and his name, the Victoria and Albert (or "V&A") only took that name at the end of the 19th century.

It's an appropriate place for an exhibition on late Victorian art and design. "The Cult of Beauty" is billed as the first comprehensive exhibition of "the aesthetic movement 1860-1900." The V&A may well be my favourite British exhibition space, and as ever with their major shows its a curatorial triumph. At its best, the V&A augments its remarkable exhibits with a vast sweep of historiogaphy, and the Cult of Beauty is no exception. From paintings, to artefacts, to a whole range of late Victorian social and cultural histories, the show is in some ways breathtaking.

What was the "aesthetic movement" then? This is an exhibition that takes in the Pre Raphaelites, Whistler, Leighton and other late Victorian painters; finds room for designers such as Morris and Liberty (whose shop still exists in Central London), and still find time for the fin de seicle decadence of Wilde and Beardsley.

If "The Cult of Beauty" has an agenda it is to revitalise our interest in this familiar, yet increasingly distant time. In parts it succeeds. Our 20th century middle classes are stubbornly enamoured of the late Victorian aesthetic, whether its willow pattern China, or Morris's wallpaper. The examples given throughout the show are luscious, pristine, but at the same time trite. This "aesthetic" was one of a very particular, and peculiar design. New materials and techniques provided artists with the means to produce things of beauty, to their own design; yet this was also a precursor for the "mass produced". The arts and craft movement, as idealised in William Morris's utopia "News from Nowhere", would end up influencing the mass-produced. 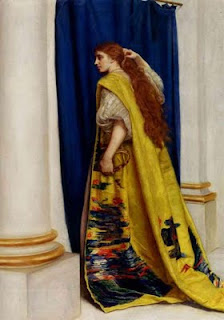 The four spaces given over to the exhibition take a chronological and thematic approach. The Pre-Raphaelites, though towering over the exhibition in terms of their influence and quality, are seen in the context of their times, their influence extending beyond their own work. But though the exhibition shows their influence, it is not theirs alone. The vivid colours and even more vivid life that we saw in the recent "Desperate Romantics" TV show comes to mind; the set designers of that show had clearly done their homework. I loved Millais's "Esther", where General Gordon's coat was turned inside out producing the vivid patterns you see in the Biblical character's beautiful gown, and the red-haired heroines of PRB legend return again and again in the art that follows. I was fascinated as well by the story of the Grosvenor Gallery, which was opened as a rival to the Royal Academy and became something of a home from home for the Aesthetic movement. It was here that Ruskin famously slammed Whistler's painting for "flinging a pot of paint in the public's face."

This exhibition was full of such historical gems as this - and you realise how febrile the capital's artistic scene must have been during the late Victorian period, even as Victoria herself stayed in secluded mourning following Albert's death. The riches of the Empire were finding their way directly into the homes and tastes of London's middle classes. Whereas the Pre-Raphaelites had worked with carpenters to design furniture to their taste, or had scoured London for 17th century eastern pottery, by the 1880s and 1890s, the wealthy middle classes were keen on showing their own ostentation. Pottery from Stoke-on-Trent emulated Chinese willow patterns; whilst furniture makers and metal workers created elegantly designs. The exhibition even imports a pair of iron gates, which were built to show off the skills of the craftsmen who made them.

A reader of Quiller-Couch's first edition of the "Oxford Book of English Poetry" (1900) is struck by how well-formed is the English canon, up to the age which has just finished. Yet the last 50 or so pages of the book are full of tedious versifiers, reminiscent of Tennyson, but without the great man's brilliance. Few survive in our memory. Modernism was not just the period that followed, but a necessary reformation, and the same is true elsewhere in the arts.

The British painters that came after the PRB seem minor. After all, in Europe a revolution in painting was being undertaken. Whistler seems a bridging figure, both between old world and new, but also between the tastes of late Victorian England and the revolutions on the continent. Other painters we look at now for their decorative powers. Leighton's Flaming June for instance (not featured in the exhibition - but there are other examples of his work), or Albert Moore's luminous "Azaleas." (My favourite painting in the show.) 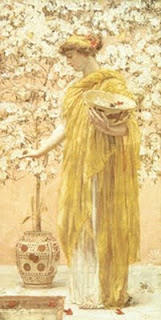 The natural world is popular with the Aesthetic Movement, but its the peacock that dominates, the exotic beauty of its feathers, becoming a leitmotif, particularly in Whistler's the Peacock Room, which is recreated via audio visual display. One can only admire such attempts at bringing art to the centre of life, but we also see how increasingly these attempts are part of "fashionable society" rather than an art for all. Art for Arts Sake, as Whistler's regular pamphlets would have it, becomes a stick which Punch cartoonists can beat the asethetic movement. In Oscar Wilde, we have both an exemplar of the aesthete and the period's most lasting criticism. Few dramatists are revived as frequently. If Wilde was very aware of the absurdities of the movement, as is clear from "The Importance of Being Earnest", he was mocking his own friends and circle, for the benefit of a wider, more conservative audience. Today, we share the laughter, mocking the pretension, whilst still admiring the decoration. It is the pre-Victorian imagination - the romantic poets, J.M.W. Turner - that still dominates British aesthetics, yet Victorian kitsch casts a long shadow. 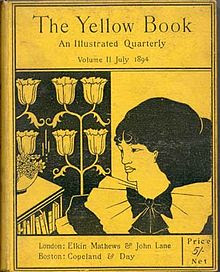 The "decadent" 1890s end the show. We see revolutions in book design, exemplified by the Beardsley illustrated "The Yellow Book." Here we have a vibrant literary journal, and an enthusiastic educated audience for its writers and illustrators. Yet if, from the distance of a century or more, we are looking for "decadence", its not in the "shocking" illustrations of Beardsley, or stories of the trial of Oscar Wilde, but in the bourgeois sensibility of the times. Wonderful as this show is, I think it falls short of rehabiliting its art. There is something a little too mesmerising about this "cult of beauty", that seems to reflect the technological advances and great wealth of the late Victorian British Empire. You will look long and hard for the real Victorian England, particularly the non-Metropolitan world. Aestheticism brought a certain European sophistication to the galleries and drawing rooms of London, but quickly became commoditised by the class who embraced it - who, in turn, felt morally outraged by the artists (such as Wilde) who had provided their guilty pleasures. For all that Rosetti, Millais, Morris and others were dedicated to illustrating truth through beauty, at some point their innovations became little more than bourgeois fashion. In the end, it is in the history of design and home furnishings that the Aesthetic movememt influenced, rather than the history of art. At its best, the paintings of Hunt and Millais, "Goblin Market", or "The Portrait of Dorian Gray", late Victorian art and literature has a fragile magic to it. It is no surprise that we still admire their buildings, and their interiors. In this exemplary show at the V&A, we see an earlier age of commerce than our own, and the echoes are very clear. Yet we have forsaken beauty for expediency, satire for prurience, Whistler for Emin. The exhibition's title is a clever one for a "cult" can mean two things; an obsessiveness about something which others don't share, and something that appeals to a small group of people. In calling the aesthetic movement "the cult of beauty" the curators of this show are noting only how strange we would now think it to want to design our lives along aesthetic purposes. Modernism, a far more European movement, never really took hold in Britain, as a previous show at the V&A amply demonstrated; and the strong hold that the aesthetic movement still has on our visual imagination is perhaps one part of the reason why.
Posted by Adrian Slatcher at 12:44 AM

The V&A is, as you note, a very appropriate exhibition venue - for decorative art - as that is its origin, a museum of manufactures attached to the School of Design (the Royal Academy School taught Fine Art). Haven't you noticed that you have hardly touched upon the Decorative Arts, and have followed the Fine Art bias of the exhibition? Or that Art for Art's Sake cannot apply to Decorative Art because it has use or function as its primary concern? This is the reverse of the V&A's history - a betrayal. The interpretation-sex, scandal and depravity- might bring in paying visitors but the history of British Design reform will be warped for years to come. Pathetic Movement, or Nincompoopiana would be a better title.

Have you seen the show? I think it does give quite a lot of focus to design as well as fine art. I wrote mainly about the fine art, as that's more my interest. I actually felt that the exhibition failed to rehabilitate "art for arts sake" (i that was its aim, PRB aside, the artists were simply not good enough) but made a good case for the influence of the design of that period over the next century.

Yes, saw the show, and paid good money to read the bad book. Even the V&A was unable to showcase pictorial art only and included wonderful examples of decorative design. This superficial and fine art-based interpretation might have passed as adequate in the 1940's - but did not include the decorative arts, which many now considere to be in well in advance of the Fine Arts.