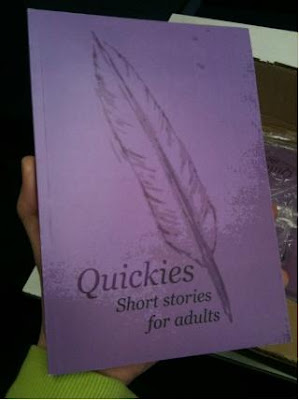 Athletes are not adverse to a bit of rumpy-pumpy if the condom consumption of the Olympics is anything to go by. However, it was writers who brought the tone down at the Northern Tennis Club in West Didsbury last night at the launch of the #flashtag Quickies anthology, subtitled "short stories for adults." The flashtag writers formed their tag team last year and as well as crashing other readings and hosting popup literary salons they have organised a couple of their own events.

So, for Didsbury Arts Festival, they, along with both the invited and the submitted writers, decided to put together an event and an anthology with a theme, basically, ahem, talking dirty in 400 words. The rest of this review will no doubt plunge into double entendre, as I, along with a dozen or so others rose to the challenge.

With tables laid out cabaret style, a glitzy backdrop, the promise of impermanent tattoos with the word "Smut", and compere Fat Roland, holding the said anthology in a pair of oilily applied marigolds, I doubt West Didsbury has seen such a debauched evening since the last Lacrosse club social. Ranging from the funny to the elegant, the sexy to the stalker, the stories delved deep in the darkest sexual fantasy recesses of the south Manchester (and further afield) literary communities. Doyen of the short-short, David Gaffney, also in the anthology, regaled us with a couple of star-turn sweary shorts, and in a well-oiled programme that would put even the best arranged swingers club to shame, we came on in groups, and explored our own little fantasies. The only orgy though, was of words.

Buy the Anthology (in the flesh, or virtual, depending on your prediliction)... details are here.
Posted by Adrian Slatcher at 4:45 AM

Hmm.."Doyenne of the short-short, David Gaffney..."
Am I being a sexist wotsit or a smartarse in pointing out that the masculine form of "doyenne" still exists. Or sexist for assuming that David G, with a name like that must be male?
Or are you just being ultra pc in using the feminine form for a male? :)

I've saved David's blushes by applying the masculine. Just a mistake. Thanks for the pointing out.