A late Sunday afternoon trip to Oxfam in Didsbury and the shop is obviously benefitting from a few New Year clearouts. Someone literary has obviously been clearing the shelves, as there was a whole shelf of new poetry books as well as literary biographies and criticism. Saddest of all, a row of self-published Lulu.com books "by the author." I wonder if they'll find a home?

Amongst the poetry there were plenty of vaguely familiar names from presses like Shearsman, Carcanet and Bloodaxe, and maybe there's a poet or two in there that I'd enjoy if I found the time to browse, yet even though most of these books were published in the last decade or so, they felt like books from the past somehow; as each year there seems - despite some of the anthologists' assertions to the contrary - more poets than ever. All these "life's works" ending up here; and though its probably the same for novels - it seemed sadder somehow. I didn't escape myself, as the anthology "Reactions 3" edited by Esther Morgan, was there as well, with a couple of my poems in. I'll be interested to see if it sells over the coming weeks! 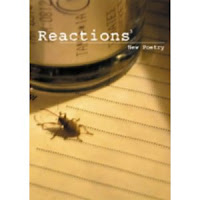 Though poetry publication is nowhere near as prolific as fiction, all those books make you think. For £50 I could probably have cleared the shelf but I feel, rather than having a great collection of contemporary books, I'd have a pile of poetic flotsam and jetsom; with a few gems between the mundane or the mediocre. I did find one little gem even today, the late Andrew Waterhouse's Windhover press pamphlet from 1998. A 99p find that I'll cherish even though it's author is no longer with us.
Posted by Adrian Slatcher at 7:48 AM