The Legacy of a Literary Magazine 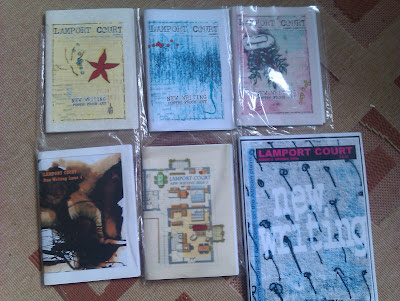 Literary scenes are a bit amorphous aren't they? I'm reading Stephen Spenders "The 30s and After" and his reminisces about that pre-war decade in particular are illuminating. He admits that they were a "scene" or a "generation" but that it wasn't as if they had meetings, even though they might circulate around the orbit of Auden, and older writers such as Eliot and Woolf. Literary worlds are quite small - and require something more than writers: they need magazines, publishers and readers. It got me thinking about "Lamport Court" the magazine I co-edited with Neil and Julie Campbell for its first 6 issues, with the first issue coming out in late 2003, (Neil would continue editing it until 2008 on his own, and its final issue was #12.) Being based in Manchester and vaguely involved with literature, art and music all three of us were able to suggest writers (and artists) who contributed to our very cottage-industry, hand-produced magazine. I'm just starting to write an essay about the legacy of a literary magazine - since important as they are during their existence, its later that they are more interesting. We published Chris McCabe, Lee Rourke, Togara Muzanenhemo, David Rose, Naomi Kashiwagi, James Davis, Hilary Jack, Max Dunbar, Paul Harfleet, Julie Campbell, Neil Campbell, myself and others during those early issues - and Zoe Lambert, Nicholas Royle, Richard Price, Eleanor Rees, Mike Garry and David Gaffney would also feature during the magazine's erratic lifespan. Not a bad roll-call, and a list of those we already knew, or who were just starting out, or came unknown through the mail, or were already established and kind enough to contribute. Nearly a decade on there's a smattering of books and anthology appearances from that list, as well as art exhibitions and albums; literary scenes not just consisting of writers, after all! There are also lots of names I don't recognise - one off poems that came through the door, or small press stalwarts who appear time and again in the listings, without ever going on (or even wanting to go on) to something more. If anyone's got any memories or thoughts about Lamport Court, or the importance of small magazines in general then please do get in touch either through the comments on this blog (or via email adrian (dot) slatcher (at) gmail (dot) com). And if any magazine (little or otherwise) would be interested in the finished article, then please get in touch! 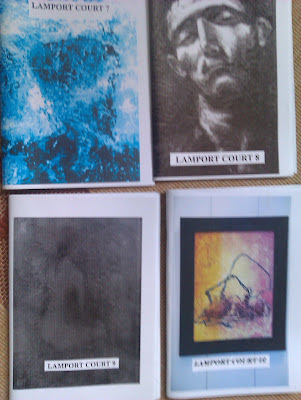 You can read 3 issues of the magazine online at the Poetry Library.
Posted by Adrian Slatcher at 4:39 AM

In 2001 I wrote about My dealings with UK literary magazines. Many of the ones I mentioned then have gone now.

We'd seen a few disappear like Brando's Hat, PROP, the Affectionate Punch and Metropolitan. Sometimes it seems when a magazine disappears the writers/editors do as well, other times its to concentrate on their own writing that leads to the demise. In a small way I like to think Lamport Court helped encourage others to start magazines - there were a lot began in the years after we started - though usually either poetry or fiction.

I think hard-copy literary magazines are on the way out. If people want their fiction seen, they're best off going to online mags where their work can be read the world over. Check duotrope.com- there are THOUSANDS of markets there. If people want to start a print publication then I wish them all the best- but they'd need something erally novel to stand out in today's digital-orientated market.

This is the period of my own writing, so thanks for the Spender reference.

How did I never hear of that book?