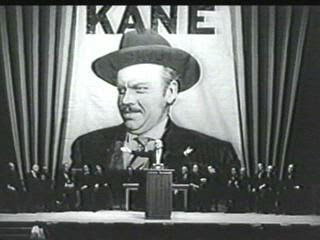 Film is undoubtedly the most remarkable artform of the 20th century and cinema history now rivals literary and art history in any discussion of that receding period. If film has supplanted theatre in many ways, it is not quite as simple a relationship as that. We've recently seen a play become a film become a play again ("The King's Speech"), films adapted for the stage ("Ghost", "Flashdance") and films and plays with similar source material. Like a written play the original version is often sacrosant, yet films are our contemporary myths - and as such - are as likely to be reversioned or parodied or re-interpreted as Shakespeare has been. There is the user "remake" of Star Wars for instance.

A few weeks ago I heard about an intrigueing project in Birmingham as part of the Flatpack Festival. YARN were asking for artists, writers and performers to help them recreate "Citizen Kane" live with each artist given a small section of the film to reinvent in their own way. It immediately appealed, not because "Citizen Kane" is one of my favourite films, but because its one of the most iconic and multi-layered stories that cinema has given us. A "drama documentary" about the fictional Kane, but based on a number of rich men, including Randolph Hearst. The American oligarch is one of the key figures of the 20th century and in Orson Welle's masterful movie it becomes his subject as much as Lear or Hamlet was Shakespeare's. Beautiful shot in black and white I last saw it at the Cornerhouse a few years ago and was shocked to realise it was filmed before cinemascope - so used are we to film's now being widescreen.

All the artists, myself included were given a timecoded section of the film to interpret with 7 days to prepare, and came together at the Custard Factory in Birmingham last Sunday - where we met each other and the organisers for the first time. Lined up in the rehearsal space all we shared were our cues for coming on and off stage. The finished work - a remarkable two hours with over a dozen artists - covered so much ground, interspersed with some small sections of the original film. Beginning and ending with the self explanatory "paper cinema" the story was retold in song, performance, art and digital media. Some performers took a particular tiny nugget and expanded on it; others told the full story but in an unusual way. I'd seen the film again only last week, but I'm sure even a casual memory of the film wouldn't have hindered understanding. I particularly liked the inventiveness of the digital interventions - a Twitter feed for the editorial meeting at Kane's newspaper; and a "live webcast" interview with Facebook and other interventions for the quizzing of Jed Leland. Special mention has to go to Deadly Serious Productions who managed to write, act and direct a short film in the mere 7 days since they got the commission - a Spaced-like spoof of Susan Alexander's opera career that had the audience in stitches.

My own section was at the very end - Kane and Susan in Xanadu as their marriage breaks up. I interspersed text from the film with half a dozen other sources - including information about the actress Dorothy Comingore (who played Kane's wife) refusing to testify before the House UnAmerican Activities committee and being blacklisted. It seemed to fit with the whole spirit of the event.

Many thanks to Gemma and her colleagues at YARN who did such a good job not only in putting such a thing together - but having the confidence in such a diverse range of performers, some, like me, they'd never met. I could well imagine a Manchester equivalent - anyone for "A Taste of Honey" or "A Clockwork Orange?"

Photographs from the event and list of performers can be found here.
Posted by Adrian Slatcher at 12:37 AM