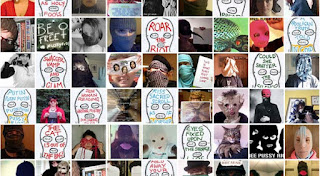 The imprisonment of the 3 women who sung a protest song as part of the Pussy Riot arts/music collective in Russia has galvanised opinion world wide. I'm so pleased that the poetry community has been part of this, and a herculean effort over the last few weeks has seen 110 poets submit new work in support of Pussy Riot. Ranging from Booker-listed Ali Smith, to myself, via a wide range of young, old, male, female, mainstream, experimental poems its looking like a great book in itself. The book is called CATECHISM: Poems for Pussy Riot.

Supported and supporting English PEN, with its long history of supporting incarcerated and otherwise censored writers, this is not just a worthy campaign, but an active component of the struggle against state and religious censorship and the crackdown of artistic freedom. This is not just about Russia, or Putin, or the women in Pussy Riot, but a reminder that the powers-that-be are always to happy to hide behind legal frameworks, state apparatus and the religious sensitivities when it comes to cracking down on voices they don't like to be heard. (Remember, that Tony Blair's Labour government attempted to make religious satire a criminal offence.)

There will be a protest event in London tomorrow with some of the poets reading, and this will coincide with the release of the e-book, proceeds from which will go to the defence fund of the imprisoned Pussy Riot members. Its also, from the poems that I've seen posted already on the PEN website, a brilliant collection of some of the most interesting poets around.

Its worth remembering that the real women in this case are being separated from their friends and families for what are essentially political reasons, and that even if their case is no longer the first item on the news, that their situation is something that no artist here or abroad should ever face.

You will be able to download and donate from midnight tonight at this web page on a name your price basis. Whatever you give will be welcome and the book itself will, I'm sure be worth your contribution on its own.You can read a number of the poems if you follow the links on this page.

Many thanks to Sophie Mayer, Sarah Crewe, Amy Key, Mark Burnhope and the other poets and translators who have made this happen.
Posted by Adrian Slatcher at 9:52 AM