I was at "Sounds from the Other City", the multi-venue Salford music festival yesterday, which is ten years old. At Islington Mill at the end of the evening there was a DJ set from ten years ago. Music is such a reminder of a time; though given that I was 37 at that time, and probably less involved in music than I've ever been, it felt like I was trespassing on someone else's memories. Yet the "noughties" hasn't got the same sense of itself than earlier decades - perhaps it will come, but the "forever now" of the internet means that even the music of a particular time doesn't necessarily linger in that decade, like in the past. Yet its strange to think that bands like LCD Soundsystem or MGMT can now be seen as nostalgic.

Yet if music always has a resonance, I wonder about poetry. What are the poems that have made an impact since 2000 - even amongst the cognoscenti? I can remember, outside of poet-friends, perhaps half a dozen. A couple of prize winners, Helen Dunmore's The Malarkey, Don Paterson's Love Poem for Natalie Beridze, the best poems from acclaimed books, Daljit Nagra's Kabba Questions the Ontology of Representation, the catch 22 for "black" writers or Luke Kennard's The Murderer then there's Mel Nicholls' unbeatable piece of Flarf, I Google Myself, or Tom Jenks' 99 Names for Small Dogs.  Also, there have been some stunning books/sequences such as Chris McCabe's Shad Thames, Broken Wharf, George Szirtes' The Burning of the Books or C.D.Wright's One Big Self. Perhaps the most memorable phrase of 21st century is also one of its least lyrical, Andrew Motion's line about the Gulf war, as being about "elections, money, oil and dad".  I'd be interested to know what other "lines" or "poems" we think might last, for surely poetry has to be at least partly about the quotable idea, else its no more use than an old headline.

Going to Bury for this year's Text Festival - the fourth to take place in this brave Greater Manchester outpost - you're greeted by a neon sign at the station "Poetry has been Bury Bury Good to Me" - which like Lemn Sissay's work in Manchester has the advantage of placing poetry in a public space. Silliman, who attended again this year, highlights the international power of language which the Text festival investigates. Yet its hard to know how much notice Bury took - on reaching the gallery there are protestors outside as coalition cuts have led to the library being scaled back. The result, an empty space that is a new "sculpture gallery" that strips back the beautiful room to its essence, will, I think become a loved triumph over time - yet art/culture have their work cut out when they are placed against being able to pick up a thriller from the local library or borrow some children's books.

It is a nice irony that the opening exhibition of "sculpture" is purely made up of words. Laurence Weiner's work has been exhibited in Bury before, and there's a certain contradiction to opening up a sculpture space with what most people wouldn't consider sculptural. Yet it also makes sense, for here the floor is empty - bar a couple of temporary pieces. In this, the paradox of language, that it makes so much happen yet doesn't take up physical room, unlike so much else in the world. Ironically, this weekend saw the hollowness of Morrison's supermarket projecting their "cheap bread offer" on the Angel of the North. Its a crass gesture, but you could possibly argue that Anthony Gormley got there before himself with that empty gesture of contemporary ennui that was his fourth plinth piece "One and Other." Crass exploitation of art is nothing new. The art will survive, however many parodies of the Mona Lisa we've seen. These Weiner pieces do seem to overemphasise our reverence for a certain American conceptualism and this show seems less vital than, say, the current Nauman exhibition in Preston. But in some ways it acts as a frame in which the gallery's other works can be more easily hung. language "polari" in the basement, and "The Language of Lists" as the main show. 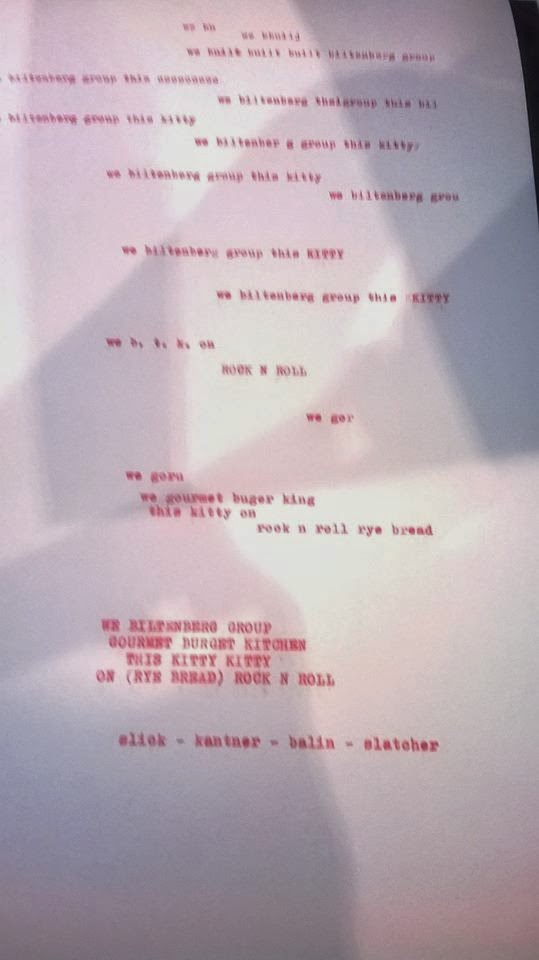 I enjoyed the redundant typewriters of the "Typing Pool" which enables anyone to participate on these obsolete machines (see my piece above) and the exhibition acts as an opening onto this year's other shows.

One of the strengths of the Text Festival is its sense of continuation, both in terms of existing traditions that embraces US conceptualism and L=A=N=G=U=A=G=E poetry, Bob Cobbing's energetic UK cottage industry around "concrete" poetry, and more contemporary movements at the edges of current artistic/literary practice. A debate on Saturday afternoon saw Canadian Derek Beaulieu, another friend of the festival, riff on poetry's invisibility. A poem was projected onto a large building in Canada and it was ignored, just as smaller works are ignored - something about poetry (unlike Morrison's advertisements) creating nothing but indifference. In some way's this is poetry's triumph - that it exists as almost an offcuts tray of language, not at its centre. Yet those of us involved with it see something of interest in that contradiction. The text festival's ability to uncover hidden language and hidden meaning puts an unusually strong light on the  work. Perhaps I don't respond to the Weiner only because I prefer my writing to be small, hidden away, read not shared. In Tony Lopez's book about the text festivals, Beaulieu talks about sending an empty box to Bury via UPS, but them refusing to let him do so unless he put something of value (in this case a blank piece of paper valued at 3 cents) in the box. Language's ubiquity makes its value hard to measure it seems.

The afternoon saw a series of readings from Knives, Forks and Spoons Press, (who published my first collection "Extracts from Levona"), which had its genesis at a previous festival. I hadn't realised that the humble name came from a desire to write or publish "kitchen sink poetry" (interestingly modest aims compared with the axe wielding Bloodaxe for instance!) Yet the list has grown so that it includes, yes, the confessional work of the originator of that name, Richard Barrett, as well as hand on heart Bobby Parker, but also finds room for Anglo-Welsh poet, Rhys Trimble, the collage/found pieces of Anne Matthews and Tom Jenks, and variously compelling work by Tim Allen, Lucy Harvest Clarke and Debbie Walsh.

I wasn't able to stay for the evening's show from conceptual poet Caroline Bergvall or return for the Sunday events as I was going to "Sounds from the Other City." Before my immersion in the sounds of 2004, I caught a number of interesting acts, the febrile Young British Artists who started slow in a mid-afternoon slot but were on fire by the end, echoing Husker Du or At the Drive In; melodic power pop from Happyness, who I assumed were from Canada, but were actually from South London; the Kate Bush/Florence and the Machine channelling (but to my mind, more a retake on late 90s trip hop aritsts like Nicolette/Lamb) Bernard and Edith, and finally PINS, returning to the festival where I first saw them, but now absolutely owning the grand, large stage of the beautiful Peel Hall at Salford University.

A good weekend was had by all.
Posted by Adrian Slatcher at 10:32 AM