The Moomins were absent from my childhood. It seems that though the books were in English by the late 60s/early 70s, I never really remember them, and by the time there was a TV adaption I was too old for them, yet I've got vague unsubstantiated memories of the latter - one of those foreign import TV shows that the BBC used to fill its schedule with. The Moomins were these strange looking creatures living in a strange land. Had I encountered them at the right time I'd have probably been a fan.

Despite this being my fourth visit to Finland, and having seen Moomin toys all over (as you see Smurfs and Tin Tin in Belgian) I'd not given much though to their creator, the Finnish (but Swedish-language) writer and artist Tove Jansson, but in the centenary year of her birth there's a lot of activity going on. From a new biography, to English issues of her adult novels and stories, to various exhibitions of her work. 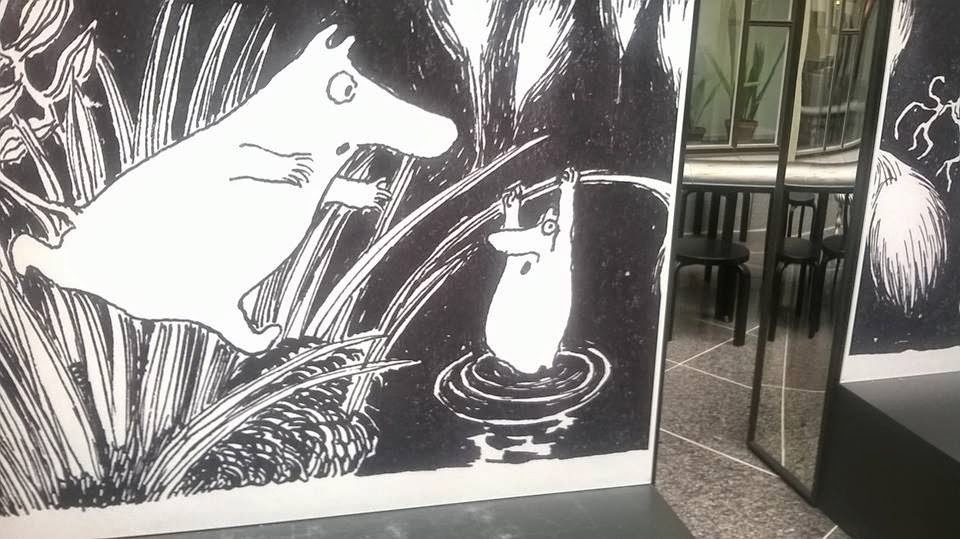 ﻿
In Helsinki this week with work, I found an hour or so before my flight visit a retrospective of her life and work at the Ateneum Gallery. Its an appropriate location, as Jansson studied there when it was the Finnish school of art. Born in 1914 into an artistic family her talents soon became clear and she began painting and drawing. The retrospective unpicks the fame of the Moomins and puts it in a context that gives due precedence to her other work. There are large early tableaux that are fairy tale or fantasy scenes, and it seems that she was always fascinated by the mystical side of Finland's natural world. Yet if there was an openness and flowering in North Europe in the years between the wars, particularly as post-revolution, Russia's grip on its neighbours lessened, the coming storm of World War Two had a major effect on those artists who were in their twenties and thirties when it began. Jansson became an illustrator for a Swedish satirical magazine, poking fun at the Nazis - though a not unfamiliar humour to British eyes, there's a whole different level of bravery for writers and artists criticising these forces in countries uneasily neutral.

Part of a Finnish demi monde, it seems that Jansson spent much  of her life with other artists and intellectuals, but her politics were through the eyes of an artist. When I recently saw the Hannah Hoch exhibition at the Whitechapel in London I was struck by Hoch's war, which she survived to moving to an anonymous suburb of Berlin where nobody would think she could possibly be the radical artist of the 30s. After the war Hoch returned to her work with a new vigour, and a sense of inculcating the fantastic into her work; and there seem some parallels with the younger Jansson here.

Jansson had long parallel careers as artist, writer and illustrator, and in her art she's a highly credible 20th century painter. To my mind the best works were some of her large fantasia scenes, which seem drawn from dreams and deftly use a wide palate of bright colours, with echoes of Van Gogh in some of her oils, particularly in her still lifes and self portraits. Her use of colour is particularly striking, even when, in line with the trends of the time, she becomes more abstract and expressionist in the 50s and 60s. The sea pictures she did around this time capture something of Finland's natural rawness. Yet I can't help but thinking that in the Moomins, however commercially successful they were, she finds a genuine mechanism for mixing the myth and reality of this northern land. As well as the books, she wrote and drew a comic strip for years, where the tiny frames are as immaculately drawn as her larger pictures. But in addition, either for the fun of it, or for dramatic adaptions of the Moomin world, she had a part in making various Moomin houses. Her other art is never less than accomplished, but its subject matter is often quite straightforward, still lifes, landscapes and immaculate portraits that on their own wouldn't elevate her beyond many of her peers. It seems that in Moominland she found an alternate world where she could speak more clearly about the world. Its perhaps no surprise that she also illustrated the Finnish translation of "The Hobbit.".

In this sense, her later move to acclaimed adult fiction makes some kind of sense, as Jansson seems a brilliant storyteller, and this sense of narrative is a track through different decades of her art. I was intrigued by the self portraits, as repeated time and again through her life, you get a sense of a complex woman trying to understand who she is and what she feels. There's a lovely short cine film of Jansson on a beach, and its carefree and happy. In the Moomin stories there is always the contrast between the threat of the outside world and the safety and security of home. Finland has a small population, but a large and proud history, and from Sibelius, to Jansson to "Angry Birds" it often has an enlarge cultural footprint. The Moomins became particularly popular in Japan, and Helsinki positions itself (as its geography allows) as between east and west.

We are beginning to see more exhibitions on 20th century female artists, and this careful curation of Jansson's life was well worth seeing, and I'm intrigued to read the biography and some of her adult stories. I've not got the emotional connection to the Moomins that those who read them as a child might have, and still find them slightly odd and otherworldly. By seeing her other work, its fair to say that the "day job" of writing the Moomins was not all that she did, but also that its an important component of her work artistically as well as in the wider culture. If her other work sometimes lacks depth of subject despite its artistic quality, in Moominland she's created something that retains an essence of the strangeness of this beautiful far northern country.

Posted by Adrian Slatcher at 3:44 AM