Last year, despite a number of troubles, the art I completed was really good. I recorded an album, quickly and coherently which was as good as anything I'd done since restarting recording in 2007; I wrote fiction  that was strange and to the point; my poetry felt achieved.

This year, because of a number of troubles, the art I've been working on seems tentative and amateurish, even misguided. I've pretty much given up on music after a bit of persistent cough around Christmas, and the few bits I did seem rough and lazy. My poetry has been either entirely absent, or in a few bursts, seems ephemeral, under-thought. I have written quite a bit of fiction, but seem to be unable to grapple with the nuts and bolts of what I'm writing.

What is it that makes us become a better writer? It is, I think, the writing. Write more. Write more often. Take my music; in 2012 I did a silly project where I recorded an E.P. every month - close on 50 songs in all. By the end of the year, I was particularly efficient. That confidence spilled into last year's "Kleptomania" where I took some old unrecorded tunes and made them flesh.

Working on poetry or fiction seems a different matter. If writing is like climbing a hill, its one designed by Escher. I don't think we ever quite know which way is up which one is down. 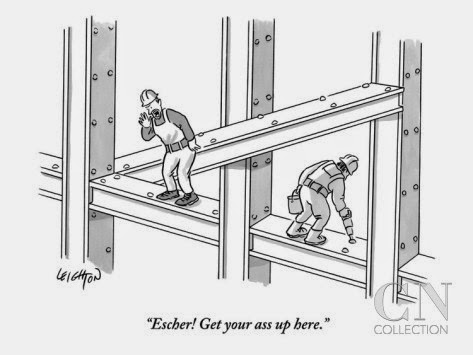 And writing is also about reading - and exposure to other works. Yet I'm often surprised how some writers seem stuck in a groove of their own practice. You see it most often where writing has a bit of a beat imperative. At some point in literary development, "beat poetry" stopped meaning "Howl" or "Kaddish" with its subtleties and inflexions and became some degradation of this - a visceral shout. Whenever a male writer tells me he never used to read, until he discovered one writer, I know that writer is going to be Bukowski. At the other end of the scale, I picked up a recent poetry magazine off the mat, and opened it up to find, despite a strident editorial, poem after poem that was set in an unchanging, somewhat unchallenging nature.
There are certain writers - popular writers, funny writers, rhyming writers - who never seem to develop beyond their initial schtick. Do they try other things and just realise they're no good at them? I suspect its the other way round: they become good at a thing and stick to it tightly. The guitarist the Edge still plays like he's in his first bar band. Being a member of U2, perhaps it was safer that way. And schtick is not reserved for the populists. A Prynne or an Ashbery may have veered quite a lot during a long writing career, but its often within a familiar trajectory. Yet if we read "The Tennis Court Oath" its the unfamiliar trajectory (as far removed from the plain speaking ironicism of O'Hara for instance as its possible to get) that stays with us. I read later Ashbery with enjoyment, yet I'm rarely astonished. He used to do astonishment.
Maybe I'm talking about different things. Maybe I don't get better either. Maybe I get worse. I certainly know that I can lack the inspiration and the discipline that I once had. I started thinking about unfinished grand projects today. Grand projects are what you have when you're writing isn't yet good enough to simply be. Grand projects are castles built out of air. Unlike in the real world, however, in the imaginative world, those grand projects are at least partially possible. And I think I prefer grand projects than small ones. Chances are if you're a miniaturist writing a love sonnet then that perfect sonnet will still pop up as a libretto in your unlistenable six hour opera.
I guess we only get to see what people show us as well. I went to hear Will Self give an extemporised lecture on "urban psychosis" to go along with the MMU  exhibition of the same name. In retrospect, at least a third of Self's talk was about his observations as he walked from his hotel (on Deansgate) to the venue (on Oxford Road.) Come to think of it, its hardly long enough a walk to be called a "derive". Yet catching myself walking down Whitworth Street the next day I found myself in Will Self world. The observations were attached to a much wider body of learning. Fascinating, fantastic stuff, yet I'm still stuck in the first dozen pages of his Booker shortlisted "Umbrella".  Perhaps we want our writers (our musicians, our artists) to be more like themselves. Its why Lou Reed's "New York" or Bowie's "The Next Day" were returns to form - they were returns to the artist's formalism. Not everyone can be a Bob Dylan. I picked up his 80s album "Infidels" at the weekend and been playing it non stop. Its almost a new wave album (and he jokingly went one better and performed with a new wave band some of the tracks on Letterman). It would have been the first Dylan album I remember coming out - but I was listening to the Cure, Cocteau Twins, Psychic TV  - I had no need for "new" Dylan, even as I still spun "Like a Rolling Stone."
So sometimes creativity is its own reward. I'm not a journalist peering into lives and backstreets looking for an interesting story. (I don't know many journalists, but the ones I do, are inherently curious, whilst not wanting to let you know much about themselves. That's why journalists make bad novelists, or maybe its bad journalists make half-way decent novelists; because the latter's curiousity always stems from the solipsistic impulse.)
Perhaps to become a better writer we have to become a different writer, maybe many times. If this is the case you can perhaps understand why some writers baulk at the effort, stick with what they know, with how they already do it. Yet there's diminishing returns I think, particularly if your canvas is quite narrow in the first instance. Though expanding it can be difficult as well. What to make of Geoffrey Hill's late career prolificness? Has Simon Armitage reverted to earlier modes after the stylistic expansion of "Seeing Stars"?  I for one am glad the new Manic Street Preachers album sounds like early Simple Minds. I suspect they won't make a career of it however.
And I'm writing this blog post late at night, unable to sleep after a tired evening. Something in the air this week has been making me feel unwell. Manchester is a polluted city, in many ways, and sometimes you need more than a face mask to keep it out. The nicest thing someone once said about my writing (and this was years ago) was that "you get better" and (here's the rider) "people don't do that."
I've always taken this to mean that I am not there yet - if "there" is a particular branded place. Yet I am not that person. I think I always write about the same things; but probably its true, in different ways. To get better you sometimes need to get worse. I think competence is overrated (but incompetence needs to be fixed.)
I'll stop now.
﻿
Posted by Adrian Slatcher at 5:41 PM

'Grand projects are what you have when you're writing isn't yet good enough to simply be.';

'To get better you sometimes need to get worse.'

My first thought after reading this was: As if we have any real control! By ‘we’ I mean ‘I’ because I judge everyone (probably unfairly and unreasonably) by my own standards. There are some bands—and solo acts and writers and artists too—who are very much one-trick ponies. I never saw John Wayne play any other character onscreen than the stylised version of himself that we all took to be the real John Wayne and the same goes for Woody Allen. And they get away with it, film after film. The plot for every Scooby Doo cartoon is essentially the same and Christ knows how many of them there’ve been. But then there’s something reassuring about this too. It’s like a kid wanting to be read the same story over and over again even though they have it memorised. Not everyone is Kate Bush. Most of us are Leonard Cohen. We have a very limited range but you can do a lot within narrow limits if you’re imaginative enough. Personally, like Beckett (not often one gets to compare oneself to Beckett), I find myself working within smaller and smaller spaces; I enjoy the confinement. I have no need to spread my wings and soar. Age is most definitely a factor. There’s not that much left I have an opinion on that I care to voice that I haven’t already written about and resolved myself on whatever the issues were. Occasionally something crops up that makes me think in a new way about an old thing but not so much. I’ve written only four poems this year and a novella that came out of the blue. The need to write has been satisfied for a while. I read a lot of poems online—especially those written in response to writing prompts—and I do wonder why they’re writing. I’m not sure ‘Just because we can’ is a good enough reason for me. If I don’t have anything that I feel really needs saying I tend not to say anything these days.

One of the films that sticks in my mind is The Glenn Miller Story, partially because I’ve always had a soft spot for June Allyson but mainly because of the scene where Miller stumbles on his “sound”. We writers don’t have a sound but we do have a voice and I discovered mine when I was about seventeen. I was never one for mimicking my heroes (although in later life I have done as a bit of fun) but I can see why a writer might need to experiment with new ways of saying things until he finds the way—sorry to get all Zen on you—that suits him best. How much mileage he or she can get out of that before they start to repeat themselves is another matter and there are those who’ve slogged away writing the same book over and over again (Anita Brookner by her own admission) and managed to hang onto an audience; there are those who’ve done the same and lost their audience and there are those who know when to call it a day.