Today's British Novel is Not Remarkable or Interesting 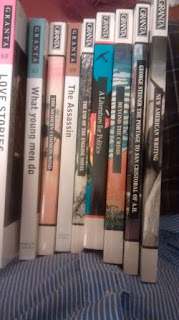 I had a bit of a find the other day in Oxfam - a whole shelf of old Grantas, including some very early numbers, including the very first issue (albeit a reprint) from 1979.

"It is increasingly a discomforting commonplace that today's British novel is neither remarkable nor remarkably interesting..." begins a strident editorial by Bill Buford (I assume), to introduce an issue entitled "New American Writing." Granta is still with us though Buford has long ago stopped being its editor. An American in England (isn't that always the case?) his energy could be seen to coincide with the energising of the English - British - world novel in English over the next few years. 1979 wasn't perhaps seen at the time as a golden year for fiction. The obscure Odysseus Elytis won the Nobel; Penelope Fitzgerald won the Booker with "Offshore". In retrospect there were some important books published: Calvino's "If on a winter's night a traveller", Angela Carter's "The Bloody Chamber" and Douglas Adams' "Hitchhikers' Guide to the Galaxy" and Norman Mailer's "The Executioner's Song" amongst them. It was also the year of Jeffrey Archer's "Kane and Abel" and Barbara Taylor Bradford's "A Woman of Substance", mega-bestsellers which would perhaps herald the book trade of the next decade as much as "Star Wars" from 1977 had altered the film business.

That first line is written in a kind of literary English that was not uncommon in the books of the time, but feels old fashioned now, too clever by half. The rest of the article shies away from the controversial opening, to become more of an academic essay on the reluctance of British (English) fiction to take on board experimental or international influences.

Granta gives us Joyce Carol Oates, William Gass and Donald Barthelme amongst others in that first issue. The third issue of the magazine is provocatively titled "The End of the English Novel" but then does something quite impressive: it extracts from "Midnight's Children" and "Riddley Walker" and also features Christine Brooke-Rose and Angela Carter. By 1983 and issue 8, "Dirty Realism", we have what might be Granta's finest hour: "Richard Ford, Jayne Anne Phillips, Raymond Carver, Elizabeth Tallent, Tobias Wolff, Bobbie Ann Mason, Frederic Barthelme, Carolyn Forché and others."

I used to pick up, and occasionally buy Granta, but over the year's it seemed to lose some if not all interest in fiction - often having themed issues which non-fiction or reportage or memoir. Looking at the steadily growing strip of Granta's on my shelf, I see its width has increased as the years went on. There have been other signature issues - particularly its Best British Novelists selections every ten years, which have slowly seemed last canon-forming as time has gone on; and a willingness to use that "brand" to showcase Best American or Best Brazilian novelists as well.

Fiction of course, is ever in crisis, as magazines like N+1 and the White Review have talked about more recently.  In an ever more fragile media age, we've become less adept at tracking those writers that matter, and, indeed, there seem some "big books" that have proven near impossible for their authors to write beyond (e.g. Yann Martel or Arundhati Roy, to name two Booker winners.) Every year another crop of debutantes, and yet it seems some of those themes of that first editorial - that the British novel can be parochial and uninteresting; that we lack an interest in novels from other cultures, or writers who are more experimental; or that we show little appetite for the more inventive American fictions, continues. A literary magazine can only be a snapshot of course, and Granta also became an imprint. The "Best novelists" issues suffer from being extracts, however apt the choices, and there's always been something very partial about Granta's approach to literature (no poetry for instance, little interest in drama), whilst at the same time, its aesthetic and familiarity makes me joyful every time I pick up a second hand issue that I've not already got. I have to say most of the 2ndhand copies seem relatively unread - but that's the fate of the successful literary magazine - as soon as its got a subscriber base, it becomes less able to take risks, and less of an impulse purchase (and at its current bookshelf prize - almost that of a hardback of a trade paperback, it probably never will be.)

However, we're not so keen on literary magazines in the UK as elsewhere in the world, and Granta's longevity and international standing have to be applauded. The row of books isn't quite a history of contemporary literature, but its a useful version of it. Its also a magazine that rarely looks back - so the late nineties, for instance, that rich period that in a few years gave us "American Pastoral", "Fugitive Pieces", "Underworld", "The Poisonwood Bible", "Enduring Love" "Disgrace", "Independence Day", "The God of Small Things," "Girlfriend in a Coma", "Atomised",, "Infinite Jest" and "The Rings of Saturn" amongst others, saw Granta publishing very few of these authors,  and seeming happy with familiar names, and the kind of "serious" subjects that made it less of a fiction magazine, and more of a current affairs one.


The fatter Granta of the 21st century seemed far more open to new writers, and fiction in general, though as the grand old dame of magazines by this stage, McSweeney's would seem sexier, and other newcomers, most recently The White Review, seem more immediate.

For the casual punter its always quite hard to get a sensible take on the current state of the letters - looking back at that late 90s list now, I probably didn't realise what a golden age it was at the time - though because I had taken two years off to do a creative writing degree I at least had the time to read these great books as they came out. I wrote an essay for PROP magazine at the tail end of the century which was entitled "As if Ulysses had never been written" and predicted that the big books of the next few years wouldn't be experimental novels, but baggy, societal tales, like Dickens, and with Zadie Smith, Jonathan Franzen and others I was proven pretty prescient.

The 21st century has seen a lot of interesting writers who maybe haven't necessarily wrote their defining book yet - Nicola Barker, David Mitchell, David Peace, A.L. Kennedy etc. - and indeed, it is one of those midlist writers who perhaps defines the age more than any, with "Wolf Hall" and "Bring up the Bodies" Hilary Mantel made historical fiction the most vital writing of the day.  Going back to that Granta debut editorial the focus on "New American Writing" is as a contrast to the unremarkable British variety, yet it has to be said that the more esoteric strand - Barthelme, Pynchon, Gaddis, Barth, Coover - would be a false one, withering on the vine, at least until Foster Wallace took it some place else; whilst the "making" of Granta's reputation - Rushdie in London, "Dirty Realism" stateside,don't yet get a mention.

If you see a pile of old Grantas gathering dust in the spare bedroom or your local charity shop, do let me know, the more I get, the more interesting the story becomes.

" there's always been something very partial about Granta's approach to literature (no poetry for instance" - they do poetry now though.

So it appears. Will have to check when that started.