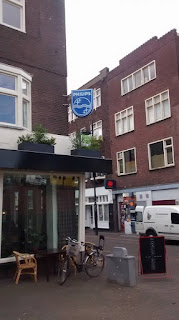 I was in Eindhoven for the third time this week. Last time there was a palpable excitement, bunting on the streets, as PSV Eindhoven were about due to win the Dutch league for the first time in years. The "P" in PSV is for Philips. This is a town that exists because of its mercantile-industrial past. When Philips rocked up there, it was a tiny place, but grew as the Dutch company became one of the world's leaders for electronics. All those companies and industries that dominate are impermanent, developed through innovation, technology and consumer need. I took the photo of the coffee shop above because it has the old Philips "badge" no longer on an industrial building, but as an adornment to a cafe.

For Eindhoven is still a prosperous town, but the manufacturing takes place elsewhere, as it does for most electronics companies, and Philips makes its money from R&D and its vast patent store. Its much less of a consumer brand nowadays, though I'm still using a Philips CD player I bought years ago. Like Nokia in Finland, a big company in a small country can sometimes seem to be over-important; and as their business changes the jobs change as well - so ex-Philips employees create start-ups, work for innovation companies, deliver services.

Our UK industrial heritage sometimes seems to have gone straight from raw materials - like coal and steel - to services, without the intermediate "making" of things. A late friend worked for the steel industry in the eighties and nineties until he was laid off. As an ex-steel worker the dole left him to his own devices; there was a view these were low skilled jobs that couldn't be replicated. But as China opened up its economy in the early 2000s, demand for steel rose and he went back to work in his old job. Of course, China was already involved in over production, but its only now the fallout of that is coming back to haunt the over-leveraged British steel industry. Its absurd in a world where we are worried about climate change, economic growth and resource security that we haven't got any sort of industrial policy - but that's Tory governments' laissez-faire attitude for you. If there wasn't the backdrop of the European referendum (more later), we might have some common sense on this matter, but for now, don't expect any.

*
I was over in  Eindhoven for a brief break, to see friends, to go to a conference - all good. But after also being to Nottingham and London (twice) in the last two weeks, I'm glad of a weekend back in Manchester - and geting back into some creative projects.

Somehow during this period, I managed to complete a new album under my Bonbon Experiment name. You can download or stream the 9 track "Vulcanicity!" here for free. In my previous post about songwriting, the song I mentioned in the introduction ended up different than I expected, as "Threshold Horizon." Like I said there, most of the tracks came music first - though I had the titles "Canal Pusher" (a Manc urban myth that was too good a title to waste), "The Girl with the Caramel Eyes" and "Standing Water", just not much else. It's been invigorating to make some music again - especially recording a whole album in about six weeks. I've always been better at doing things faster.

*
Intrigued to see that rapper, poet, performer, playwright Kate Tempest is now a novelist. The review in the Observer indicates that she's gone back to the story that forms her debut CD, so maybe the desire to "colour in" the outline of a story that means a lot to you is a strong one. Its not that unusual to revisit the same or similar material in different format of course, and that means both "brand" and subject will no doubt appeal to her existing audience. Poets writing novels don't always make the crossover, so it will be interesting to see how this most popular of performers has done.

*
Being away means I've missed quite a few things going on. There's always lots of literary activity in Manchester of course, but also elsewhere. My friend Melissa Lee-Houghton has an essay in the new Poetry Wales, an issue focused on "desire", which I'm looking forward to. We went to see Katherine Angel read at Castlefield Gallery last year, and it got us talking about the subject, and wondering about how writers approach it.

Both of us will be reading at "Reading the Other" a new collaborative event where writers read each other's work. It will be at Sand Bar, on Grosvenor Street on Saturday 16th April. Will update with the details when I have them.

Posted by Adrian Slatcher at 1:37 AM