I spent most of my family holidays in Wales. We went from caravans in Borth to a chalet at the "Happy Valley" park just outside of Tywyn, and later a holiday home further north in Llandudno. Yet despite - or because - of this I don't think I've been back to the Welsh coast since I left home at 18. So this week I decided to make amends and catch the train to Aberystwyth and stay there for a few days as a base. Not driving, I was reliant on trains and had discovered the "Explore Wales Pass" which gives you "four days in eight" of travel for £69, starting as far east as Crewe. 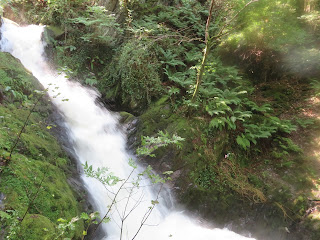 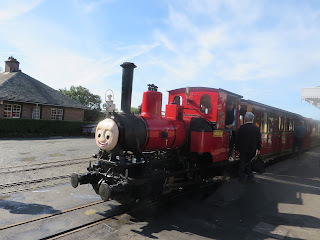 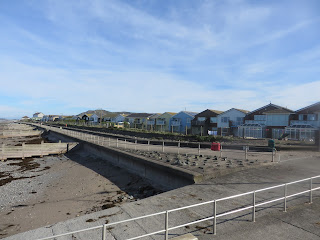 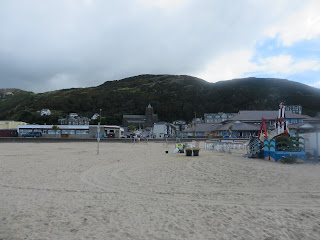 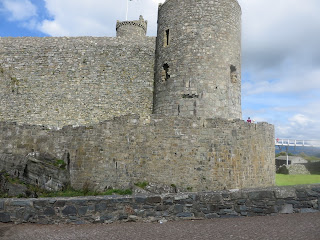 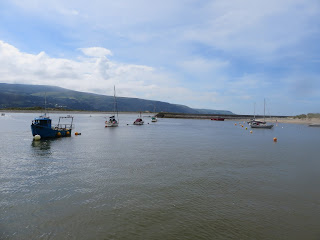 Aberystwyth is a university town, and the beach is purely utilitarian, a small pebbly space. Yet its a lovely small town, which seems somewhat uncorrupted by the times, despite the inevitable (and welcome) 24-hour Spar and Cafe Nero amongst the local shops. There's plenty to do there, from a vertical cliff railway, to the nicely landscaped castle remains looking out onto the bay, to the imposing National Library of Wales which I got to just before closing time on a grey Monday. Here there was a fine exhibition by Aled Rhys Jones in response to the poetry of David Jones' "In Parenthesis" his modernist classic account of the battle of Mametz where 4,000 Welsh infantry died in the Great War.

An early start on Tuesday took me along the River Dyfi towards Tywyn, the seaside town we'd spent so many years at. My plan, on a lovely day, was to catch the Tallylyn Railway up to Dolgoch falls. The light railway I'd not been on for best part of 40 years, but as the oldest volunteer maintained one in Britain its been taking passengers up the valley towards Snowdonia since the 1860s. Amusingly for me, the air was full of Brummy and Black Country accents, a reminder that this part of Wales has a longstanding affinity with the part of the country I'm from. Speaking to my mum afterwards she mentioned several friends who had caravans or cottages on this coast line. Tywyn was always the sleepiest of towns and we'd usually go down the coast to Aberdyfi for the beach, or given our propensity for holidaying in the wettest weak of the year, we'd find a castle or a market town to drive to.

Aberystwyth was a good place to stay, but not as convenient for the west coast train line which runs on a single track for long stretches, and where there are no local trains just the nearly two-hourly trains from Birmingham and Shrewsbury which split into two at Machynlleth before going on to Aberystwyth or Pwllheli. I stopped off at Machynlleth, by friend Amy having tipped me off as it being a good town for a books. Sure enough I picked up a couple whilst waiting to change trains.

On Wednesday I decided to go as far up the coast as I could find time for - and stopped off first in Barmouth and then at Harlech Castle. Arriving at Barmouth around ten, the beach was still uncolonised, a glorious expanse of sand that takes ten minutes from prom to sea. Passing the fun fair and the donkey rides you come round the corner to a secluded harbour, where kids are crabbing, small boats are available for hire, and the distinct smell of seafood emanates from the cafes and restaurants. The old town is lovely, a couple of snaking roads, where old churches and chapels have been turned into antiques shops, and little cafes have set up every few yards.

Harlech, half an hour further north, see the train passing past numerous little "settlements" where a clump of holiday homes or static caravans are next to their own private stub of beach. By Harlech, you've come in land a little, as the rock escarpment on which it is based, has been colonised as the sea has pushed back a little. The castle itself is of course a wonder. It took just six years to build, in the 13th century, at an astronomic cost, and has survived numerous sieges in the centuries since. It struck me that a castle is the medieval equivalent of a nuclear deterrent, it has very little military use, but is a sign of geopolitical power. For a castle's strength - as a secure place overlooking the land it controls - is also its weakness - for when a castle's rulers have had to retreat to their battlements surely the fight is as good as lost? At various times the castle has passed between hands, from Norman-English to Welsh custodians. Now, of course, it has world heritage status, and a lovely visitor's centre. The walk up from the station was a steep one. At the top of the building, much to my surprise, I heard my name spoken, and there were two friends from Manchester with their family, as equally surprised to find me there. Of all the castles, in all the world, we had to walk into this one....

With the weather turning on Thursday I decided to come back to Manchester, had I been off for a fortnight I think I might have stayed a couple of days longer, but I'm planning to go back to this part of the world more regularly from now on. Weirdly enough, some of the things that I've loved about European travel, heritage and the sea, are so easily found on the Welsh coast, but also something else; in a world that feels overpopulated at times, the sense of the crowds thinning out, and a calmer, less frenetic way of life is palpable. Seeing this coast by train was a first, as well, and was as much a part of the fun as the destinations.
Posted by Adrian Slatcher at 2:54 AM