The Limits of Talent 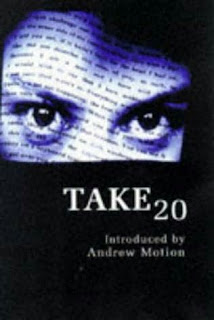 Going through some old books I came across "Take 20" the UEA anthology from 1998 edited by Andrew Motion. I applied for the UEA creative writing course initial in 1996 and was told, I think, it was too late, but maybe I should try the following year. I did and got an interview. The course leader at that time was Andrew Motion, soon to be Poet Laureate. I was going there to study fiction, so although he has written novels and biographies as well as poetry, he was an odd choice to be leading the country's most famous writing school.

I leafed through the book and what struck me was firstly, how many obscure names were listed - perhaps in any student anthology that is going to be the case, and also, amongst these a few that stood out as having become famous. When I went for my interview I was the only male amongst a group of female candidates, and whilst we waited to be called I was surprised to find that my own credentials ("shortlisted for the Lichfield Prize.... a few poems and stories in magazines") were pretty poor compared with two of the women, who'd published novels already. The first of these was a genre novelist wanting to study the course to move into literary fiction, the second was a woman called Frances Liardet whose debut novel I bought after the interview from the bookshop on the UEA campus. Liardet - whose debut "The Game" - I thoroughly enjoyed, obviously got on the course, whereas I didn't (Motion had a bad back at the time and was taking strong painkillers, and by the time he saw me, the must have worn off and he was in some discomfort, and I gave a pretty poor interview to a somewhat preoccupied interviewer). Yet the piece of fiction from Liardet here in "Take 20" is the last I heard of her fiction. The second novel "Salt Life" mentioned here, never appeared as far as I can tell, though an Arabic speaker, she also did some translation.

That was 1997 - this came out the following year - and the following names are familiar to me, Trezza Azzopardi, whose debut novel "The Hiding Place" was shortlisted for the Booker Prize in 2000 (I've not read it, so I wonder if it's "Bar the Rest" the novel extracted from here?), the poets Sarah Corbett and Owen Sheers, and Ashley Stokes who published me years later in "Unthology 4" from his Unthank Books press.

The biographies at the back of the volume are the usual mix of prizes won, works in progress and books about to be coming out - UEA having an enviable success rate. As this was a period before social media, in the early days of the World Wide Web, its perhaps not surprising to read that some writers had fallen by the wayside. Saddest of all, Stephen Foster, a Faber published author, and partner to Azzopardi, drowned in 2011 after being let down by mental health services.

There are a number of poets in the book alongside Corbett and Sheers and I re-reading them, I was impressed by the work of Stockport-born Joyce Lambert and American Shawn Walker, but I've struggled to find a reference to them on the internet - I wondered what happened to them?

Being UEA its an international anthology. I could have been part of this cohort, if only my interview had gone better. Instead I went to the University of Manchester, a course solely focused at the time on novel writing. We had our own tragedy there at the time, one of my fellow students, taking her own life. The last time I saw her, oddly enough, was on National Poetry Day, when Andrew Motion amongst others was up at Waterstones to read from a new anthology. I got a nod of recognition from him, which was nice. Of my own cohort, several have published novels, most successfully Lee Rourke, but it's taken a bit longer I think.

The people who study on creative writing courses have talent - they are not coming out of nowhere. God only knows how many writers the country can "support" in some way - back then there were less than half a dozen courses in the UK, and Manchester was probably second or third behind UEA in reputation. Now there are hundreds of courses - B.A.s, M.A.s, PhDs in creative writing. I suggested that we could have an anthology in our year at Manchester (I'd seen previous years from UEA) but it was tactfully suggested to me that not everyone on the course was up to scratch. There were only ten or eleven of us so I guess it might have stood out - besides, our job that year was to finish a novel not to get involved in side projects. Cheap publishing and the sense that it behoves students well to prepare something for publication mean that alot of courses now issue anthologies - including my alma mater who launch their latest this Thursday at Anthony Burgess Foundation.

As I struggle still with my own writing, I wonder on the limits of talent - for to get as far as a creative writing course is to get "so far." Literary lives are by their nature more likely to be obscure than famous. A good pub quiz question might be to "name Booker Prize winners" and see how many people would get. Our famous writers aren't always the ones who have written our most famous books. Back then, of course, I suspect nobody on my course (or the one at UEA) took any notice of a first children's novel by someone called J.K. Rowling that came out at that time. I think talent gets you so far - it gets you noticed, maybe - but then again, there are many, many competent writers out there whose "talent" I guess is of a journeyman nature. On the one hand it is what you do with it that matters, on the other hand where it takes you. I'd recommend Liardet's "The Game" for instance, its an excellent coming of age novel, that stayed with me a long time after I read it. On my own course, the first person to be signed to a deal was an exciting writer called Mark Powell who managed two books, "Snap" and "Box", before life got in the way.

In the Premiership each club has an academy churning out exciting young players, but rarely do a crop all flourish at once, or to the same level. The first teams of Manchester United, Manchester City, Arsenal and Chelsea rarely feature more than one or two "home grown" talents. To stand out you have to really stand out - not just be good, but lucky; not just lucky, but hard working; not just hard working but able to do a particular role. Writing is less obviously meritocratic than football - there are still plenty of books published by celebrities for instance. I guess most course tutors will quickly latch on to a writer with "potential" but I suspect that's all it is; though there is something to it - I don't think there will be many suprises about who makes it, maybe more about who doesn't.

And "making it" is a weird term in the context of literature. Being published? Being read? Winning prizes? Yet this is a stupidly niche industry even today. Twenty years seems long for an apprenticeship but as we live longer, as we do our creative work alongside other work, it shouldn't seem that surprising if occasionally it takes that long to get "success" - yet it can work the other way as well. Motion's crop of 1997 would probably not have been particular enhanced by him including me as part of it; whether my own career would have had more of a chance with the contacts and reputation of UEA, who knows? It could easily have gone either way.


Posted by Adrian Slatcher at 2:52 PM