Teenage Dreams are Hard to Beat

Despite having being writing and recording songs since 1982, and having had a synthesizer (Roland Juno 6) since the start of 1984, it was in September 1985, recently back from a post-A-Level holiday in Australia, and just before I started at University, that my music found its place. The reason: a 4-track recorder, originally borrowed from a friend. For a "one man band" who didn't play very well, and wanted to sing as well, the 4-track was a revelation. Simple to use, and cheap to operate (it used standard Chrome C90 cassettes) I quickly recorded two full cassettes of new music, a C90 offering 45 minutes of recording, taking up both sides of the tape (enabling - as I'd soon find out - the opportunity to play music backwards!) These first recordings were a mix of multi-layered instrumentals, which in retrospect owe something to Phaedra-era Tangerine Dream, and tentative pop songs. I had no drum machine, so the rhythm electronic music that I liked from people like Cabaret Voltaire would have to wait a bit. My lyrics had mostly been written during that summer vacation - but other influences found their way into the titles of the songs: "Kiama" was a town in New South Wales, whilst "The Wasp Factory" was the book I'd bought at the airport on my flight over to Brisbane, and seemed appropriate to the "buzzing" sound on that instrumental. (At the time I had no idea it would become a classic.) 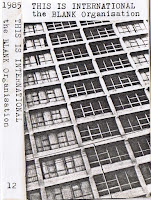 The best tracks from these two hastily assembled cassettes would make up my first "proper" album "Mortal Mime". A 2nd release "17 Schemes (of dare & folly)" with its 23 minute long opening track "Complexities (Pt.1-6)" would follow later. 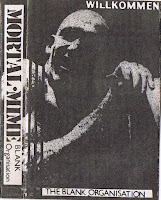 Subsequently armed with a drum machine, and borrowing a more preset based synthesizer - the Sequential Circuits Max - I recorded more songs, and, alongside the ambient instrumentals and tentative pop songs, began recording some beat-based music. 3 "singles", "Alternative Product", "Tamarine" and "The Sorrow and Other Short Stories" were recorded in quick succession, including versions of some of my early pre-4 track songs, as well as at my most accomplished track to date "We R All Essentially Gods."

By summer 1986 I was working on a 3rd album "Entering the Adult Frame" - still mostly longer songs, but more ambitious ones - as "The Adult Frame" with its lyrics about growing old and missed opportunities indicates. At the time I was 19 years old, my first year at university had been great, but had fled by. Instead of finding "like minds" for a band, I'd made good friends who were more interested to listening to music than playing it. Lancaster at the time was not a particularly cutting edge town. The band for freshers week were The Sweet, and the biggest crowd I saw during that first year, was for ancient folk legends Fairport Convention at the Town Hall. In the wider world: the analogue electronic music that had come out a few years earlier had been taken up by the corporates and highly produced versions - Tears for Fears, Madonna - had taken it far away from its punk/new wave roots. Recording on hissy 4-track cassettes (though it was good enough for Bruce Springsteen's "earthy" "Nebraska" album) was against the tide in more ways than one. The Smiths and R.E.M., with not a synthesizer in sight, were the big bands on campus. Yet I persisted as a "bedroom musician" and my "folly" (literally: as my new artist name was The Folly, perhaps taking after the famous folly in Lancaster), came up with a 3rd full length cassette. Amongst its seven tracks is a long beat-driven instrumental called "King & Kingdom Come." It sounds like a proto-house record, but was recorded some six months before I'd heard "Jack Your Body." 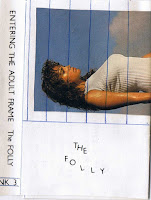 I've been going back through these old recordings - long since digitised - and now have put together a 2 CD compilation of 1985-6 4-track recordings. The tracks are long (over long in places) but inventive. The vocal tracks are perhaps the weaker pieces, as I was only just beginning to learn how to write songs (do you ever learn?) and my passive Lawrence-from-Felt voice is often deep in the mix. By the end of 1986 I was moving on - including another long electronic track "Work Addiction" which in its original recording (included here) ran to 16 minutes.

The best of this period are probably the ambient instrumental pieces - and a compilation cassette I put together the following year grouped them all together on a C90.

Yet what's interesting, looking back, is that I was still a teenager when recording all of these - albeit one who had left home, and was studying a degree. Later volumes will see my music become more song orientated, more sophisticated, but I'm glad I've still got these recordings - and that over thirty years later I can re-present them.

If you could go back and give advice to your younger self - what would you say? That it will be all right? Perhaps. Maybe I didn't need the advice - for I kept recording - and still keep recording - despite a lack of support, and even outright hostility at times. These are the recordings of a private obsession - though I'd play them to you if I asked - and so seem to exist in a place of their own. It's impossible to think back to being a teenager, to recreate that younger self, particularly when so little of it seems worth that much. Yet, I'm so glad I was obsessively creative during those years. The poems I wrote (such as the lyrics for the song "Tamarine") are adolescent, and any stories I wrote feel wooden or derivative, but the three or four hours of music I made, has its own integrity to it.

The 2 volumes of the 4 Track Years Vol.1 can be downloaded or streamed here PART ONE and here PART TWO.

Posted by Adrian Slatcher at 3:17 AM