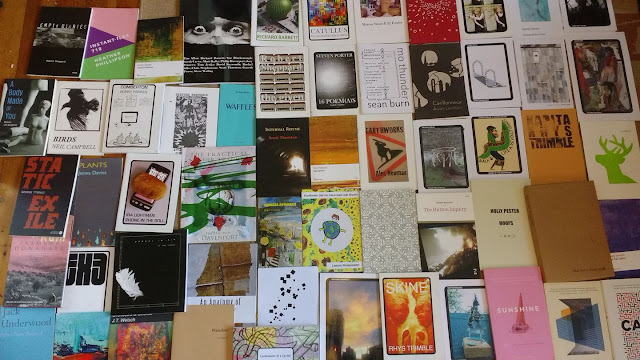 Perhaps in the 1980s or 1990s there was a sense that contemporary poetry was made by a few hands, who were the annointed ones, shuffled into publication by Faber or Carcanet or newcomer Bloodaxe, or perhaps one of the small lists of the majors. You had to be an initiate to know what else was going on - the small press magazines, the pamphlets and chapbooks.

Anyway, the majority - if not all - of the books above are from the 21st century, from a range of presses - though with quite a number from Knives, Forks and Spoons, whose photo frame covers are pretty distinctive in the above picture. I've been deliberately selective, so left out - mostly - the major poetry presses, though there's a Jack Underwood pamphlet from Faber to the bottom right, and Heather Phillipson's debut collection from Bloodaxe up top left, and Christian Bok's bestselling "Eunoia" in red near the top. Notably this shied away from the usual Bloodaxe cover style, appropriately enough for a poet-artist. Other presses of note include Penned in the Margins and Salt, the latter no longer publishing poetry, and here represented by one or two of their "Salt Modern Voices" series, which I was also published in.

I was just rearranging a few tottering shelves and before they all came crashing down, decided to lay out some of these and take a photograph. It's an impressive haul, around 60 books and pamphlets in total, probably less than half of the ones I've snaffled away from readings and mail order over the last ten years. There's a few interesting ones here. In the middle, between Leanne Bridgewater and Chris McCabe, with the patterned cover, is one of the "Stop Sharpening Your Knives" anthologies - #3 from 2009 - which brought a spotlight on a number of (mostly it seems) London based poets including Emily Berry (now editor of Poetry Review), Heather Phillipson, Jack Underwood, Joe Dunthorne, and Sam Riviere. McCabe's debut - from Salt - had a number of poems that we published in "Lamport Court" - and his other book here - the "book  in a box" "Shad Thames, Broken Wharf", in brown to the right, an uncategorisable "play in voices", shows again how contemporary poets and presses have been inventive with their design.

There are other books I'd forgotten: a pamphlet from Amy de'Ath, on the right with the green stag's head on its cover; Matt Welton's pamphlet for eggbox publishing,  and "Waffles", in light blue to the middle left. A survey of contemporary poetry would have to take a lot into account I think - not just the "award winning" books that dominate the prizes. Note there are no Capes, no Picadors here that I can see; those lists, having only limited interest to me. Poetry requires reading rather than synopsis.
Posted by Adrian Slatcher at 2:31 PM