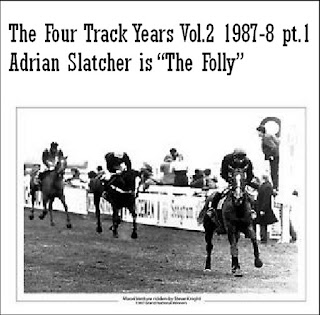 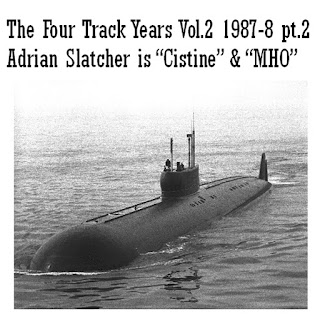 As some readers will remember, I also write and record music, mostly electronic, usually, though not always, vocal. I began recording in 1982 when I was 15 and just had two tape recorders, one to play in the background whilst the microphone on the other picked this up as backing and I would play and or sing over the top. I recorded pretty much constantly until the late 1990s, first on 4 track cassette and then belatedly to digital - though never directly to the computer - though from 1998-2007 it became very much an occasional hobby. On getting a new 8-track in 2007 I decided to take it seriously again, and have over the last 10 years recorded 8 albums and a wide range of E.P.s and singles mostly available online under the name Bonbon Experiment. My website contains these in order pretty much from "Vertical Integration" through to last year's 3 "Test Pressing" e.ps.

More recently I've been archiving the period 1985-90, a prolific period, between the age 18 and 23, when I recorded 14 cassette albums and many more side projects under a range of different names. Its a massive amount of material. This was the period when I first got a 4-track cassette recorder, until I started using a reverb unit in 1991 which changed my sound quite considerably. I've managed to squeeze this period into 7 "CDs" which alongside the 2-CD nineties compilation "Nineties Sell Thru" and "Digital-Analogue" which mops up the period up to "Vertical Integration" in 2007, creates a 10-CD archive collection of sorts.

Compiling the past is an endless job of course - but hopefully this means that the majority of the music that I'm happy to keep is now online - though of course the original albums all have their own "charm" - for anyone who has at least a passing interest in what I've been doing over the years, or is interested to see my progression - or lack of - as I work within a pretty familiar sonic palate, of synth, drum machine and vocals. The task of "compiling" is never over of course, and I'm sure I'll do a compilation of the last ten years at some point, but its usually good to do it at a "pause" and this year alone I'm expecting to be releasing two new albums in the forthcoming months, so probably now's not a good time.

As someone who continues to make music into his fifties, I can't help but notice that the 4-track years in particular are very much a "young man's music" - there's a yearning, for life, for love, for music itself. My "talent" if I have one in this area is not that of a musician or a singer (though I'm impressed by what I've done with my limited voice over the years) but an interest and an ability to create sounds, and songs from a recording set up that's not that pretty much remained a "bare minimum". There are songs here I wish I'd taken more time over, sloppy lyrics, glitches in recording and performance, but its "outsider" music in some sense. It's also a bit of a time capsule - listening to the 4-track albums in particular I've been taken back to exact time, place and circumstance, not always that happily, and these songs act as some kind of audio diary. That said, the autobiographical can be overdone - sometimes you just get a catchy phrase - "a million days", "swimming for air", "missed by inches" - and somehow make a song from it. Some of these tracks are "personas" as well - versions of myself, making music alone, but kind of imagining it exists in some way in the real world - which of course, as this website proves, it does; but in another way, as so few people ever heard it, was just a simulacrum.


Posted by Adrian Slatcher at 1:42 AM