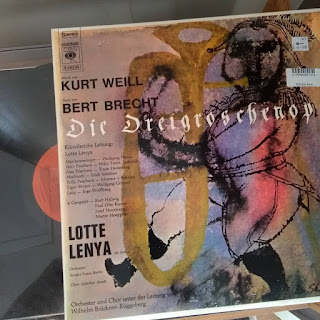 The 1930s have long been on my mind. Weimar art and culture is a vibrant pot that continues to be worth stirring, and its ending as the Nazis came to power, remains the lesser tragedy, given what happened in the war, but nonetheless a tragedy that still resonates. And given that memories fade, or history gets rewritten, art continues to be a rebuke against forgetting.

Listening to Die Dreigroschenoper (The Threepenny Opera), and reading about its genesis, its fascinating to consider the piece in its relationship between high and low culture, and between the mainstream and the avant garde. Gay's Beggar's Opera was a popular success, the word "opera" being appropriated for a song cycle that appropriated the best of popular culture of the day. It was clearly something that Brecht and Weill picked up on - and sure enough - from its first performance they had a popular success on their hands, that nonetheless attracted the middle classes to the work, as a "must see."

British and American audiences have mostly come through its songs - "Mack the Knife", the English translation of its most popular song, was one of the most popular standards of the 1950s, widely recorded by a range of popular crooners. By the 1970s Weill/Brecht were well established in the repertoire, and with suitably strong reputations in their respective fields; but its interesting that its been those on the avant garde who have been drawn into interpretations - at least within the pop field, particularly of later work such as "Alabama Song." The drama (and decadance) of 1930s Berlin finds favour with David Bowie, Klaus Nomi, Marc Almond, Ian McCullough and others, whilst being somewhat expunged from the commercial record. It would be a brave and nuanced performer who would bring their work to the X Factor or The Voice.

I've recently been listening a lot to Lotte Lenya, who appears here, and was Weill's partner. Her long career included a role in popular culture as Rosa Klebb in the Bond movie "From Russia With Love", as well as the appearance of one her albums appearing on the cover of Dylan's "Bringing it all back home." For those of us with a prediliction towards the international avant garde, its strange how certain erstwhile popular works ("Mack the Knife" is probably as famous as a song can get),  can retain their cultural currency.

It's no coincidence that both The Beggar's Opera and Die Dreigroschenoper have remained popular works as well as having great success in their day - for I think they have a universality that cleverly taps into various cultural currents. The avant garde, if its anything, is a hybrid, a shaking up of parts: no wonder it is drawn to collage, and that can be re-purposed, think of Burroughs and Gysin's "cut ups" or Kathy Acker's rewriting of classic works. As in literature, so in art, with Hannah Hoch, Andy Warhol, Richard Hamilton and others; and in music with sampling, and unorthodox covers, as well as the cyclical influence that sees Philip Glass reappropriating Bowie and Eno's Heroes and Low to make his most "traditionally" classical pieces.

What I think this shows is that modernity is very rarely derived from nowhere, or without influence, but whether we are talking about high culture or popular culture art forms that are relentlessly squeezed into their prevailing codes are unlikely to extend the form, and eventually become sclerotic and derivative.

Art is a threat because it does not necessarily respond to the prevailing narrative of the times, politically and culturally; and also because, as it is often non-explicit in its politics, it is open to interpretation which the sloganising of the time doesn't allow. In the excellent, though somewhat frightening, TV drama Brexit: the Uncivil War, the successful "leave" campaign is reduced down to the manipulations of backroom psychopaths, manipulating the message through algorithms and simple repetition to the extent that a complex relationship is reduced to a yes, a no, as required by the dumb logic of the plebiscite. In this its clear that art - because it can influence not just the way we think, but how we process complex worlds - becomes even more important if we are to retain a free-thinking capacity. It is no surprise that from the Nazi's crackdown on "degenerate art", to Stalin's policing of its composers, to China's cultural revolution, to the killing fields of Cambodia, to the Lord Chancellor's ban on what could be seen on a British stage, to McCarthyism, and now to the pulling of arts education from schools, the refusal to listen to "experts" across all kinds of fields in Britain and the U.S. today; that culture threatens conservative and repressive narratives in our society by questioning their very validity, and giving us the tools to do so.

A nostalgic art is one that is unchanged and unchanging, so that even fierce iconoclasts of the past become packaged. The sugar coated "Imagine" becomes a regular on Smooth.FM whilst the context behind it, Amsterdam bed-ins, the avant garde albums with Ono, are conveniently ignored; classical music hides behind the tailcoats and opera glasses of upper class entertainment. In The Uncivil War, the actors playing Michael Gove and Boris Johnson, two media-savvy careerists who've been amongst the architects of Brexit, see each other from their private boxes either side of some classical performance. This is where power happens, amongst culture that can no longer shock, or inform. The poetry festival, the blockbuster art show, these are also manifestations of this power, locking people out through their customs or price even as they pretend to an egalitarian. Outside, in a dingy warehouse or pop up space or dive bar, above a pub or in someone's bedsit, is where art is actually happening; if there is a resistance (there is always a resistance) this is where it begins.

And yet, we live in worrying times - and art, like civil protest, is beginning to be repressed as a result. The arrest and imprisonment of civil rights activists against fracking (which was successfully quashed on appeal) had the "couldn't make it up" scenario of happening when a particular judge gave judgement, despite having family connections in the energy industry, and - perhaps a sign of the small pool from which the ruling class comes from - coming from a line of judges which included the overseer of the Pendle witch trials.

More recently, and very shocking, is the arrest and suspended imprisonment sentences of drill musicians for performing their work live is perhaps the most shocking overreach of police and judicial power in the arts that we have seen in over twenty years. Skengdo and AM, names new to me, but big enough in their music community to be playing to large crowds, join a list of artists targeted for their work. It is a dark time.

With Brexit continuing to suck all the air from the room, its easy to forget how little Europe or being part of the European union has been part of our artistic discussions over the years. There's often a parochialism about our island nation that turns inward whenever there appears to be a threat or a difference that we don't understand. Like the cloud that covers the land in Ishiguro's metaphorical novel "The Buried Giant", we prefer the mist of isolation, than to see the ships arriving on the horizon - and that seems to be whether they bring enemies or new goods to trade. We've often, as a nation, punched above our weight creatively, benefiting as often as not, from our isolation, our cold, damp winters, and our English language; but also that's a chimera; many of our most important artists are imports - think Handel, T.S. Eliot, Epstein, even popular favourite Freddy Mercury - or from our polyglot margins, Celts, Scots, Irish, or imports from an English-speaking empire. Our last two Nobel writers - Lessing and Ishiguro - as examples.

This is not necessarily to aim for a political art, but to appreciate how political art can be in and of itself. Brecht clearly recognised the potency of reviving the Beggar's Opera in a different context, and it flew; for a contemporary Britain our narratives need to move past the sentimental. Even the uproar around Danny Boyle's attempts to create a corrective narrative for his Olympics opening ceremony in 2012, now seem partially obscured by what was clearly - in an age of austerity - a festival of bread and circuses. The avant garde - if such exists - and if we are even allowed to use such as French term (for which there is no direct English equivalent) has always been an international exchange of ideas, above and beyond the differences of language and culture; it is resisted by Putin in imprisoning Pussy Riot just as it was in other places and other times. Here and now, we see that government funding for the arts becomes more and more a creature of political whim; May's attempt for a post-Brexit festival of Britain could well fall flat on the impossibility of her uninspiring leadership delivering on any kind of Brexit that doesn't destroy the country. The funding will no doubt stay in place, the chosen artists may well be ones willing to bite the hand that feeds, but as ever, the scale and majesty of officially sanctioned art, can act to nullify even the most experimental of gestures.

At the same time - this weekend in Glasgow to see art - and hearing about a range of D.I.Y. and grassroots events in Manchester, our own resistance is far from subdued. Art on its own as is never enough, as the crowds flocking to Die Dreigschenoper would soon be going about their normal lives, fleeing or dead, or part of the nationalist war machine; its easy to forget (as we stockpile tins and bottled water for a "no deal" Brexit) that we need bread and circuses. Let's be careful who is providing them however, and what are their motives.
Posted by Adrian Slatcher at 4:16 AM