How much is there left in the tank? I wonder about this. Writing is so much more than just putting words on the page, but about the harnessing of some cosmic energy, that is both within you and outside of you. If the drive to write was always there, then what if then it stops? I think I will always be creative, its innate within me, but writing...what is it exactly? Its not a job....its a strange vocation. Like Greene's Whiskey Priest what if the only thing left is to continue writing, but not believing it anymore than he did? I suspect that's why it's one of Greene's most resonant works. In a world where you've been conditioned for a certain faith, or belief, to be told that is no longer acceptable. It may wither, but can it truly die? The withering is enough, I think.

I seem to be finding less time to do this faithless task of writing, and with less certainty about why to do it. There's always been too sides, the private side of writing, a pleasure, a prayer, but the public side, an act of worship, a getting the work out there. On which side of these am I on? There's half a dozen unfinished - or is that "hardly started" - stories on my laptop, the incomplete novel I keep promising to return to, to put it out of its misery if nothing else, poems in notebooks that whenever I try and pull together seem to have no coherence other than that they were written by me, at some point. Life gets in the way, eats up time. I sometimes think writing does require some kind of state "in extremis" (as an old poem of mine was titled), something to fight against. Watching Russel T. Davis's "Years and Years" this last few weeks, it feels like television as novel, with a heft that only the longer work can have. Certainly we are in novelisable times, and Manchester, where it, and I are set, is a cinematic backdrop. We are also a city of literature, yet one that has yet to find its great city work. The contenders are all peripheral I would say: A Clockwork Orange is not set here, but feels Mancunian in its Ultraviolence. It's always timely, that novel of the psychopathic free will, in an age of Trump, Putin, and now, it seems Johnson. A Taste of Honey comes close, but its a play of course, and stubbornly in the sister city of Shelagh Delaney's Salford. I'd put a marker down for This Nation's Saving Grace, Unknown Pleasures or The Smiths, musical markers of the city. And yes, there are the older novels, the Gaskell novels, or working class fare like Love on the Dole. So there's still something to be written, I think, of Manchester, about Manchester, and I used to think I would write it, but I'm not sure now if anyone wants to hear it or read it. We live in optimistic times when it comes to culture, there's too much nihilism in public life for there to be room for it in art it seems. Even "Years and Years" which has the world going to hell in a handcart, is written optimistically, life, family, rebirth.

So at the moment the particular challenge I have is that everything I sit down to write, I think, wait a minute, I've already written it. There's twenty five years of this stuff on laptops and hard drives, quite enough for one man, one writer, one life I'd have thought. I don't necessarily think I can do it better than I have done already, and that's clearly not been good enough one way or another. Magazine editors and people running literary nights get younger, are overrun with enthusiasm and optimism, even as they struggle with the hand of being young in 2019 - but at least they are young. There's not much of a model for the writer who hasn't defined themselves fully after a quarter of a century.

Perhaps writing this is an attempt to kick me from out of the slumber. I've plenty to "do" - even literary wise, given some of the projects I've become involved in, and I know I crave, as ever, the requirement to be creative - maybe its back to the music, which similarly sits in a state of disarray, a dozen unfinished songs from "the next album." It's not writers block I think so much as taking pause, and asking what next.
Posted by Adrian Slatcher at 2:47 AM No comments: 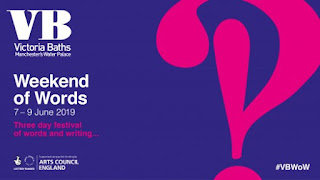 This weekend, if you fancy a literary swim the place to be is Victoria Baths, the restored community venue just behind the universities and hospitals. A great venue to host, and a great venue to explore.

This Saturday sees a range of workshops during the day, and then on the evening a specially commissioned reading of 6 new stories by some of our finest writers - that's from 7, with a bar open from 6. You'll need a ticket for particular events to attend. Then on Sunday more workshops and an indy book fair, so more of a drop in day, where I'll be selling copies of the Some Roast Poet magazine and hopefully a cassette (!) of my live poetry.

Posted by Adrian Slatcher at 11:33 PM No comments: