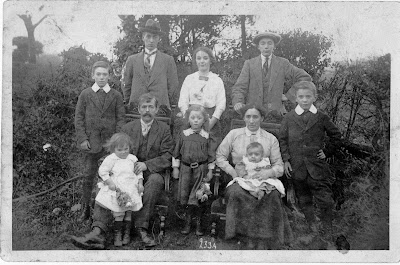 I'm not much into nostalgia, nor do I tend to fetishise particular images or artefacts, but this photograph, of my great grandparents, sitting, and their eight grandchildren, with my grandfather on the left hand side, has been obsessing me since I saw it last week. We reckon it has to be Autumn 1914, given that the baby of the family, Great Uncle Bert, was born in the May, and there's still leaves on the trees. On the eve of the Great War of course. As farmers (and for the two older boys, fireman and railwayman) they were in protected professions, and none of the family went to war - though I guess the war came to them, as did the second world war.

It's often been written that the Great War changed everything, but its fascinating to see this picture before the change. You'd probably date it fifty years earlier from the dress, I'm no expert. I think of 1914 as part of my modern era - after all, modernism was in full flow. Yet this is a rural community, in the industrial Midlands. Little Wyrley is a hamlet; there's a great house and a series of smallholdings, and cottages. Great Wyrley - a mile or so away - was written about in Julian Barnes' novel "Arthur & George". My grandfather was a tenant farmer, his own father had been a farm labourer. It's less than 100 years old, and everyone in the picture is now, of course, dead. Like all big families there were a fair share of fallings out. I don't remember more than a couple of my grandfather's brothers and sisters, and those, inevitably, the youngest.

I'm not a historical writer, but my own life begins here to all intents and purposes. Its as far back as we can go that also remains in the memory of those who I grew up with. I don't think I could do justice to their story - and it might be quite a mundane one - like the twins in Bruce Chatwin's "On the Black Hill" (a novel I immediately felt kinship to because of the similar setting, albeit the other side of Birmingham) nobody went that far: that would be left to the next generation. I'm not a historical writer, but I do have a sense of history, and belonging. It's more likely that this photo - as artefact if you like - becomes a good way of telling a more imagined history; I've written a song inspired by the photograph, and it might be a song cycle, mixing family myth and reality, like Natalie Ginsburg's "Things we used to say", is the only way to approach such things.

Perhaps related, or not, to the above, is this article I've just come across on Arts and Letters Daily, about Jill Price, the woman who remembers everything. Even from the start of the story I was a little sceptical, as remembering particular dates of things, requires, I guess, a mental map of what those dates were in the first place. Jill has, it seems, an OCD of memory, where her constant going over things in her own life means that she can't forget. Its an idea I had for a story once - how overwhelming could that be, if you remembered everything? I thought then how debilitating it would be. With only reading this piece I can't quite tell what depth of memory she has - because that's the more interesting thing. Not remembering every instance of something, like some human timeclock, checking in every day, but remembering the depth of an experience - first kiss, first day at school, a summer evening... Writers need that kind of memory, I guess, its accuracy in its essence not in the verbatim.
Posted by Adrian Slatcher at 1:23 AM