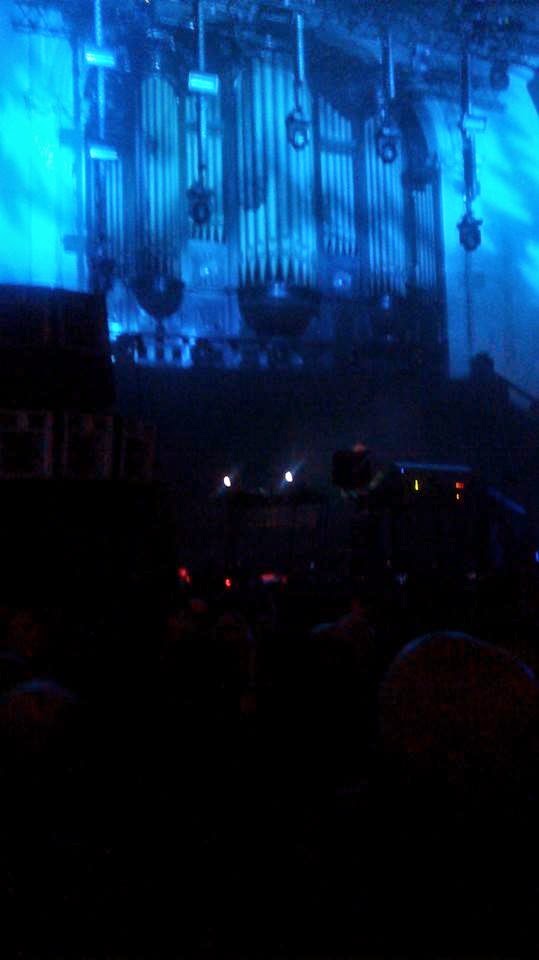 The first thing you notice on arriving at Manchester's Albert Hall to see Underworld is the sparse stage layout, with two Apple Macbooks, to the left of a bank of keyboards hidden from view.

When "dubnobasswithmyheadman" was released in 1994, the World Wide Web was in its infancy, and though computers were used widely in music, they were nowhere near as powerful as they are now.

The concept of bands touring their classic albums is one that can seem purely nostalgic, and surely for electronic dance music, which is so often singles-orientated and defined by its time, the idea should be ridiculous. Yet, "dubnobasswithmyheadman" was and is an exception to these rules. As Karl Hyde admits from the stage, he doesn't like to look back, so was uncertain about this tour. Yet last year saw a massive 20th anniversary reissue of what in effect was their debut album (they sensibly kept the name Underworld from an earlier pop-rock incarnation) and its such a seminal piece of work that performing it live makes a strange sense.

Go back to the early nineties, and the "revolution" in dance music that had begun in 1986 with "Jack Your Body" and Chicago house, had hardly petered out, rather it had morphed into a more generic "dance" music. Technology had improved for a start, so that whereas earlier house tracks had been built round tiny samples, it was now possible to build much more complex tracks. You could go to a gig to see top 40 indie band and there would be only a couple of hundred people there; yet go to a rave the next night and there might be two thousand. It was this world that Underworld understood, explored and exploited. By putting their rock band sensibility to use behind a club type record they took dance music away from its instrumental tendencies and infused it with a lyrical sensibility. Listening to Hyde as his deep murmuring vocal underpins the brooding opener "Dark & Long" its hard to think of  a precedent. His often surreal phrasemaking is a poetry of urban life that perhaps owes something to Lou Reed, but musically, I can only really think of early Eno or mid-period Cabaret Voltaire as being anything similar.

And if Underworld sounded pretty unique in 1994 its why their sound hasn't really dated twenty years on. Tracks like "Mmm...Skyscraper I Love You" and "Spoonman" are long, multi-part songs that are like electronic versions of "Midnight Rambler", "Heroin" or "The End". There's also something of the metallic darkness of early Sisters of Mercy, especially "The Reptile House", in these brooding songs. Yet because they are underpinned by an insistent trance like rhythm (and "trance" was a sub genre they virtually invented on this album) even the darkest songs are danceable and mesmeric. Playing the whole of that first album and then contemporary singles like the Voodoo Ray-like "Rez" and finally the triumphant nineties anthem "Born Slippy NUXX" their two hour set is as perfectly judged as a good DJ set. And you realise how "dubnobasswithmyhead" - an unheard of double album - is so perfectly judged, including previously released 12" mixes alongside slighter songs that give the audience a breather. There are a couple of moments that if not dated, seem of their time, such as the reggae/dub style "River of Bass" (itself closer to the Trip Hop sound that was happening around the same time) and "Surfboy" (which incorporates elements of Deep Forest/Cry Sisco style jungle samples); but otherwise the decision to tour a twenty year old dance record makes perfect sense.

The single that followed the album, "Born Slippy" came out unheralded, though I was a big fan at the time, but when it was used as the soundtrack to film du jour "Trainspotting", it went to number two in the charts, not only their only top ten hit, but an anthem for that generation. Its depiction of a night out, with cries of "Lager, lager, lager" was both celebration and warning, yet it became - like "Born in the USA" - an anthem liked by the very people it was probably critical of. Caught in the middle of air-thumping men of a certain age during "Rez" and "Born Slippy" in a slightly too-packed Albert Hall, it reminded me of the way that the celebratory nature of early nineties techno, exemplified by Underworld and by the communal Megadog gigs, quickly became as unruly as Oasis at Knebworth. Twenty years on, the lads still want to be lads. Despite that, the gig was a triumph, and a reminder of the ambition of electronic dance music in that era. There was hardly anyone in the audience under forty (at £30+ a ticket, perhaps no surprise), but it did make me wonder what a new generation would be listening to which had the same kick.

I'd been making electronic music myself for a decade when Underworld appeared, and I immediately recognised a music that had managed to achieve that mix of the rock band and house music that I'd suspected would come along at some point; what's remarkable is how finely achieved it was, how unique, and, two decades on, how well it stands up.

(Try this track of mine, "Forcefeeding" from 1991, I needed the skills of a Darren Emerson to take my pseudo goth EBM in a more commercial direction!)
Posted by Adrian Slatcher at 5:07 AM