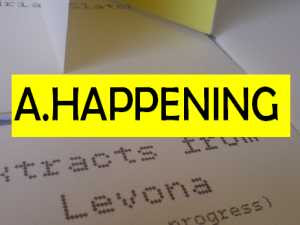 Conceived in the weeks recuperating after my eye op, and - coincidentally - a couple of days after the General Election, A.Happening at Madlab yesterday was partly a chance to launch my chapbook "Extracts from Levona" from Knives, Forks and Spoons Press, but also an opportunity to put together a more esoteric artistic afternoon. Although everyone who attended had some connection with the performers, there was a good sized crowd, with toddlers and teenagers alongside the adults. I'm not sure we'd qualify as "family friendly", but it made the event far less solemn than these things can sometimes be.

I was really grateful to the other performers, Matt and Chi-chi for topping and tailing my reading respectively, and though our planned showing of some short films hit some technical glitches, Karen, my compere kept the show on the road admirably. I read the 3rd of the 4 poems in "Extracts from Levona", partly because its the most political of the four; though I realise with these long stream-of-consciousness pieces, that the reading of them is now as vital as the writing of them. I like work that can't be paraphrased, has to be experienced, and I realise that my jokey subtitle for the collection "work in progress" refers to the individual pieces as well. It seems only appropriate that in a week of politicial uncertainty, that I should be performing work of a somewhat provisional nature.

We did film the event, but I'll have to see how that came out before deciding whether to put it online. In the mean time, you can see my reading the 4th piece from the book here.

Yesterday was a lovely way to spend a Saturday afternoon, and I realise, probably the first artistic event I've put on for over a decade - so thanks to all those who helped, performed, and most of all, attended. Once the dust settles, I might see about putting on another one.
Posted by Adrian Slatcher at 2:27 AM

It was an interesting event, a shame about the technical snafu with the films, but otherwise enjoyable.

I always think having an audience with kids or others who aren't really paying attention is kind of more fun than something with just a bunch of people sat round attentively.

Incidentally, I mentioned I'd made an audio recording of the event. Getting my recorder home unfortunately proves that somehow I managed not to record even a second of it.

Yes, good to have a range of ages. That's Saturday afternoon for you! (And the age of my friends!)

Shame about the recording - I'll have a look/listen at the video - and see what it looks/sounds like. Can always extract the audio.