If a tree falls in a forest and no one is around to hear it, does it make a sound?

I wonder if we are re-entering an age of ghosts and spectres. Human history has rarely been without its supernatural element. At times, that belief in God has been palpable, and found physical form in the nature of churches, books, and - as counterpoint - the murder of non-believers and sending them to an equally physically imagined Hell. In the 20th century a different kind of paranoid supernature seemed to emerge. Regimes of Hitler, Stalin, Pol Pot and others - (and though less murderous, McCarthyism in the USA, the deference to the British monarchy, Stasi-led East Germany) - had their own supernatural apparatus, even if the bogeymen here were very human. Perhaps our stories of ghosts and spectres are exactly this, a way that we dehumanise what some of our fellow citizens have done undertaken. One of my favourite paintings is Caravaggio's of the taking of Christ by the Roman soldiers in Gethsemene. 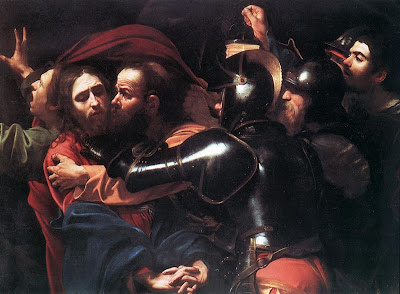 Here, Caravaggio reimagines the Biblical-historical scene as it must have happened. These are obviously men (as is Christ) but he gives them a sheen of the other world through the hard black shells of their uniform. This is a painting that we see echoes of in Epstein's monolithic "Rock Drill" or George Lucas's Darth Vader.

The supernatural is not just the belief of the ignorant, but may be a far more subtle way of passing on myths and warnings through history. There were the islanders who went to high ground because the colour of the sky had changed, and escaped some of the worst of the Indonesian tsunami for instance. And our nursery rhymes and fairy tales are often warnings about very human interlocutors.

It is not that the information age is an obvious candidate for "superstition" - surely everything is there to be checked and verified? But of course, as spurious Twitter deaths and social media witchhunts show, the transmission mechanism is what has changed, not the propensity of humankind to think the worst. There are two ways I think in which superstition will continue in this age of information. The one is one in which primitive cultures faced with new inventions have always responded - with suspicion about the magic of it all. The "machine" is full of ghosts now, and fewer and fewer of us know how it works. Could, in a few years time, it be impossible to find an averagely educated person who actually understands what this magic of ubiquitous information is? But second, I think, is the distinction between the physical and the virtual. Already some history is becoming unavailable (or appearing so) because it is not showing up in a Google search. I can well imagine a future where physical artefacts could be as impenetrable to the future citizen as certain things are for us. Part of the joy of Antiques Roadshow and other shows is how "things" give an insight into "how we lived."

For the writer in this age - and not just the writer, but the artist, or the musician - we live in an age of immense over production. Or rather, there's less of gap now between the "professional" and the "amatuer". For in the novels of Jane Austen or Henry Fielding characters wrote copiously every day; a vast, lost archive of people's lives and creativity. Poetry, art, fiction, music all required (and require) some ability - but the ability, now, to make them available, is more than ever.

There seems a vast pool of contemporary poets for instance; or contemporary short story writers; or artists; or musicians. None of these groups is "amateur" in the old sense, yet in whatever way we contribute to the discourse of the day, the possibility for this art falling silently in the empty auditorium seems greater than ever. I came across the catalogue for Becks New Contemporaries 97 the other day its new enough to be archived on the internet by some of its artists, but I wondered how many are still practicing? (All, one would hope, and it does take time....Forsyth & Pollard's website says they had their first major London exhibition only last year!) And to what extent "practice" is a market activity. Just as publishers and magazines need writers to contribute to, record companies need bands to put out, so do galleries need artists to show.

This flourishing of artistic endeavour, should, of course, be one of our great achievements as a nation, as a culture - every bit as much as the churches that stand in every English village (each with their diligent, educated parson. But if empty pews speak clearly of over-production of religious experience, a left over from a previous age, what now? Youtube is an endless fascination. Every video uploaded - for instance - requires skills, with a camera, with a computer, that though "simple" aren't to be dismissed. Faced with this abundance, this longest, flattest of tails, there's a real risk that outside careful niches, art - this semi-professional art - falls silently. We all know of cult artists who did something a long time before the mainstream; we may be doing it ourselves; yet the contemporary critical culture is so linked to the marketing machine; so linked to the economic case for art (for instance, ALL the 6 "shortlisted" for the Ted Hughes prize this year are "commissions" - 4 of them for the BBC - surely, automatically excluding new, younger or less established poets?) In other words, just a few years after saying that the internet would democratize, hear we have more examples of how "gatekeepers" are back in a very clear way. If we've long wondered about the Turner Prize shortlist, for instance, it's partly because it's criteria is a professionals' one. Although I regularly go to contemporary art I don't think I've ever gone to Turner-shortlisted show. I don't even know if there has ever been a Manchester one that has been shortlisted? It is when the shortlist is announced - and we see them exhibited together - that the general public is let in to the newly annointed. The process is as cloudy to most people as the appointment of a Pope. Yet, we perhaps want to keep it that way, be provided with the menu and then taste the food, not be given the ingredients and asked to forage for ourselves.

For arts that require a certain amount of investment - the art show, the short film, the vinyl album - the artefact can still have a power of legitimacy. It's why poets still crave books after all. Yet, views on YouTube are no more an arbiter of a fanbase than free downloads. The internet has given us many good things, but I'm not sure Ed Sheeran's career is the one we were expecting. Valiant activities from small presses are stymied by two things - an over-production that is their main way of creating scale, and a fracturing of a small, possibly hardly-existent audience.
It's entirely possible of course that the "80%...90% of everything is crap" formulae is just getting higher - yet at the same time we are being asked to buy more, consume more to keep the economy going. "More" in this case can include culture - whether its DVDs, cinema tickets, CDs or poetry books.

We don't yet live in a new age of superstition, but there's a sense that something might break. Rather than seeing as the "Occupy" movement or the summer riots as signs of an angered, engaged population, what surprises is how, compared with previous ages, how little is going on. Visiting the Manchester Histories Festival in the Town Hall on Saturday I was amazed by the amount (and the nicheness) of the local history groups present. What would "success" mean to each of them? A new member? Three or four conversations? A book or an artefact sold? Who knows? Looking for something to eat I ended up in the shopping district. A crowd gathered as there was some freestyle kids dancing competition on a packed Market Street. Elsewhere, the Arndale centre was hardly negotiable, so many people were out and about. There is nothing supernatural about consumption - and here we are, trained to do it, continuing to do it, finding a small bit of spiritual release in doing it.

I'm not sure what I'm saying - these posts are often first drafts of ideas - and I've conflated a couple here, without quite getting to the heart of either. The wondering where superstition will exist in an age where things become increasingly virtual (does the artefact become more important? Or do libraries become as empty as the church of an ancient sect?) - and the role of over-production of art in a culture that needs the over-production more than it needs the art?

In the last week, I've bought books by Laura Oldfield Ford, Philip Davenport, John Lanchester, Neil Campbell and others, yet not sure how much time I'll have to read them - or God forbid, write about them as well! Yet, I'm sitting here, with a week off, knowing that I need - for my own sanity; and because its what I do - to add to this stockpile of work, that at best might receive only a silent applause. I applaud those publishers, blogs and magazines that have carved out their own little coterie, their own little audience - its possible that that's enough; that it creates a shape and narrative around diverse work, and, in time, that will feed into the wider culture. Alternatively, it might be that we are all the followers of narrow sects, proclaimers of the true word, gathered together in dimly-lit basements, glad only that our solipsism is cast aside for a night a month, measuring out our achievements with other solipsists, always a little bit fearful (but possibly glad) that someone outside - some black-clad Roman will come and haul us from our self-designed cell and into the light of public testimony or punishment.
Posted by Adrian Slatcher at 1:16 AM

Some thing to add to the pot -

* Survival of the Fittest pressures mean that we're more likely to mistake a coil of rope for a snake than vice versa; i.e. Animism is a safe option.

* Belief in superstitions can be a win-win too - you don't lose much by believing in something that offers a large reward for a minor commitment.