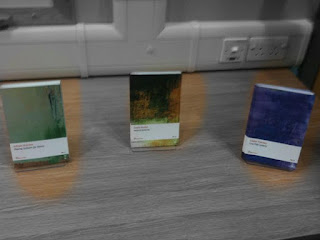 My first of 3 "gigs" on the Salt Modern Voices tour took place on Thursday night at the University of Warwick, with Clare Trevien and Emily Hasler. Claire and Emily are alumni of Warwick and were invited back by David Morley and George Ttoouli to give a workshop, and a reading, which is when I joined them. Warwick has a dedicated "writer's room" which gives a space for tutorials, readings, whatever - although the somewhat insular nature of universities means that it was a bit of a bugger to find for someone who'd not been there before! I'd made my way to Warwick from my parents in Staffordshire, taking two trains and a bus; and it all went smoothly until I found myself on the rainy campus searching for the building where the reading was taking place. Not finding an open entrance I saw some other people trying to get in, and asked them if they knew where the writer's room was... "You're Adrian..." said Emily, so I finally met my fellow SMV'ers.

We were joined in a reading by a current student, Ian Chung, which was a nice touch. Both Emily and Claire read "Leamington Spa" poems from their books - and it felt like I'd been invited into someone's home, rather than just a reading. I read a few poems from "Playing Solitaire for Money" and a couple of new ones. There were about a dozen of us, and I enjoyed meeting the students, as well as the other poets in the room. The Salt Modern Voices isn't necessarily a "school" or a "movement", just a series of books by promising poets who are quite varied in styles and influences, and it was good to add the two women's books to the selection I've already got.

The next reading I'm doing will be on 14th November at the Compass Pub, in Islington, 7 for 7.30pm. 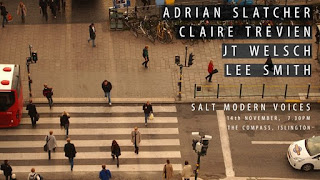 Posted by Adrian Slatcher at 2:41 AM