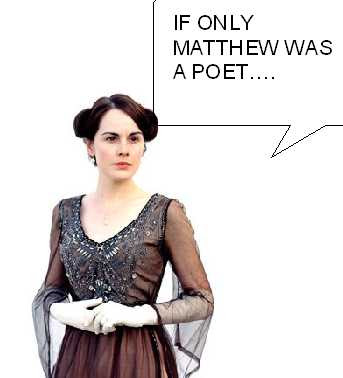 Tonight's the last episode of series 2 of "Downton Abbey" - though thankfully its going to be back for a third series. Yes, its become a bit of a guilty pleasure, though whether its for its sumptuous set dressing, its overwrought melodrama, or just because I'm in love with Lady Mary (see above), I couldn't say. Though its as historically accurate as, say, "Anonymous", it does at least try. We've had the Titanic; we've had the Great War; and tonight it looks like we're going to get Spanish Flu (a very useful cast winnowing device!) But I think they've missed a trick. I'm pretty obsessed with the literature of a century ago, and the years immediately before and after the first world war see a highly fertile literary and artistic scene - with London, and later Paris, at the heart. Reading biographies of this period is a bit like a costume drama, as characters have a walk on part in each other's story. Poets, in particular, drawn to London, sought out W.B. Yeats' regular weekly meetings at the Cheshire Cheese.

I've just started reading Matthew Hollis's beautifully written biography of Edward Thomas, and the main characters of Thomas and Robert Frost have already been joined by Yeats, Pound and Rupert Brooke. "The War Poets" are familiar to every school child, and its often too easy to separate them out from the literary culture they came from (as they died young, and as a writer like Wilfred Owen was unknown before the war) yet there was a literary culture that young men (in particular) aspired to be part of. Publishers then, as now, treated poetry as a bit of a side project, often the poets subsidising the books' production; and literary reputation was jealously guarded, and new poets usually depended on an older writer's reputational patronage to "get on".

Thomas is at this point in the narrative a literary hack, and yet to write a line of poetry - but he's just met Robert Frost so I've high hopes for him, and I'm sure I'll give the Hollis book a proper review later, though so far, its a lovely work (like Andrew Motion and Ian Hamilton, Hollis is proving that poets make excellent biographers of other poets). But, back to Downton Abbey, surely Mary - a romantic soul, but with both a wild temperament and an inner hardness to her, would be married off by now if only Matthew had written poetry? Then again, maybe her impressionable sister, Sybil, is the one - and the Irish chauffeur Branson will turn out to be a poet as much as a revolutionary. For though most poets these days would not get anywhere near the great and good, in those pre X-Factor days, even such philistines as the Queen Mother would find themselves in the company of poets such as T.S. Eliot ("Such a gloomy man, looked as though he worked in a bank.") Poetry fans look forward to Series 3 of Downton with expectation....
Posted by Adrian Slatcher at 1:13 AM