We're all Postmodern These Days

They always have good subtitles at the V&A, and "Postmodernism" is subtitled "Style and Subersion 1970-1990". In a series of rooms, it doesn't give us a historical perspective as much as a thematic one. In this sense, it follows on from its last end of century show, "The Cult of Beauty". In "Postmodernism" we have spaces devoted to buildings (including the ones that weren't built); to artefacts; to music; to fashion. There's no real contextualising, except through the artefacts, which, given the subject is probably for the best. How do you come up with something as amorphous as "postmodernism" and then nail it by definition? Yet, we all know (or refer knowingly) to things being "postmodern." Like its close cousin, irony, we don't always get it right.

This video - not in the exhibition - would seem to me a gleeful example of the postmodern. Here are the Beatles, judging (and defacing) artistic representations of themselves, and giving the prize to the winner Jeremy Ratter, who chose albums by Shostakovich and Mingus us as his prize. Ratter would later find fame as the driving force behind anarchist punk band CRASS. But what of it is postmodern? The mix of fan with the worshipped? The Beatles judging a prize and the winner choosing a music that (at the the time, not later) they would have been seen as a pole apart from? Or the historical juxtaposition - that in a historical quirk, the founder of one of least populist bands ever should be thrown together, before that time, with the most popular? It would have been nice to have seen something of this kind of absurdity alongside the more formal works. But this was the early 60s, and our story starts later.

At the start of the V&A's exhibition they talk very clearly about Postmodernism in terms of its reaction to modernist design specifically in architecture. Here there's an orthodoxy that is dying through its increased irrelevance, and postmodernism was a reaction against it. The subtitle of "style and subversion" is important though. Postmodern design could be brash, modernistic, retro, but was always magpie-like in its appropriation. Similarly, the willingness to coopt both ideas and physical pieces from the past to incorporate in the new, was, I think, about looking the world the way it was and could be, rather, as in modernism at its most utilitarian, what we should plan it to be.

Yet, style and subversion are in many ways contrasts. Just as the aestheticism of the arts and craft movement and the Pre-Raphaelites led to decadence, kitsch, and a mass produced decorativeness; the intellectual idea of postmodernism as subversive comment on the past would soon be picked off, as its most commercial exploitations emphasised the style. The contradiction of Malcolm Maclaren's partner, Vivienne Westwood; punk designer to leading British designer; is there throughout the exhibition. Whatever was once radical, would soon become the mainstream. The music room is a delight, showing the best of NYC performance art - Klaus Nomi, Grace Jones, Laurie Anderson, Talking Heads - as the brash quirkiness became mainstream. Yet, turn a corner and you have a 3D hologram of Boy George, the boy who perhaps wanted success (and everything else) just that bit too much. Look away from it, and nothing appears to be there, stand straight in front and the hologram comes to life, an eerie ghosting across the years. 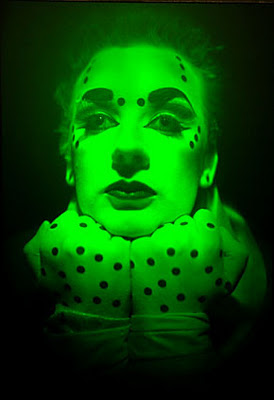 And if music was one way in which the postmodern could go mainstream, design culture was another. British magazines like ID and the Face were aimed at the mainstream. Their "stars", were like Warhols' "superstars", famous in their context - yet some actually became stars - like Robert Elms or Steve Strange or Marilyn. A series of Peter Saville designs for Joy Division and New Order look less like the startling classics I used to consider them, and more a trick repeated time and again, in the hope that no-one notices. Saville's wholesale theft of imagery is postmodern to the core (as in a Koons "sculpture") but in the glare of the gallery, there's a whiff of cynicism about it - of an art school kid passing off found images as their own aesthetic. In Saville, as in Neville Brody's Face covers, there's no longer a sense of "bricolage" or "collage", more a sense of pure appropriation. It is the constant question with "sampling" culture - is something original created from the vulture picking? That the appropriation sometimes works so well that it supercedes the original, well that's postmodern as well.

By 1990 surely it was all over anyway? The digital age had begun (first CDs, then the internet), and the naive early digital artworks, with their limited memory leading to the blocky representation of type, seem innocently new. Technology made it possible for everyone to be postmodern - whether its a photoshop mashup, or Richard X remixing Gary Numan and the Sugababes. The point now would be that you wouldn't notice the subversion, and that the style itself had become ubiquitous.

As ever with the V&A one is impressed by the cavernous depths of their collections. The "postmodern" never really stood much chance in British homes and cities that were still wary of the "modern" - and, as when you stand on the strip in Las Vegas, the vision of modernity we now say, is so breathlessly large, and unsubtle, that its no longer even ironic. That's why you could only describe Lady Gaga as "postmodern" to water down the original movement. There are delights aplenty in the exhibition, from failed prototypes of consumer goods, to clothes and objects you'd not be surprised to see in either junk shop or museum.

Literature is the one art that's mostly missing, (a quote from Amis's "Money" rather than his very postmodern "London Fields"),perhaps unsurprisingly, but given a movement that can sometimes seem more an intellectual conceit than anything more real, then something - whether Ashbery, or Wolfe or Barthes or Foster Wallace - would have seemed a more appropriate contextualisation than the 80s New Romantic soundtrack that is released to coincide with the exhibition. Two key movies from the early 80s play overhead - "Blade Runner" and "Koyaanisquaatsi." What's great about both is that they are fully formed - they are the achieved vision of their visionary directors, rather than tentative stabs at the future. After both movies, the future city was a fixed idea, rather than the malleable one that might have appeared earlier. The shock of seeing the fast collages of "Koyaanisquaatsi" and hearing Philip Glass's music focused on depicting these visuals was highly radical at the time - but has been so endlessly repeated ever since that we can almost forget the radical questions it once asked. And that, probably is where postmodernism becomes a victim of its own ubiquity. The style is wonderfully apparent throughout this diverse exhibition, but the subversive gets lesser and lesser as time goes on.
Posted by Adrian Slatcher at 9:55 AM

This is a wonderful post and I will read more of your work. I can't wait. I blog about media and Foucault, Baudrillard, etc and so you see why I love this one of yours.