I was pushed towards the Weblog Awards Lit category by Ready Steady Book, one of the shortlist - and, along with the ever estimable, (but hardly bloggy at all, its a DIGEST) Arts and Letters Daily, the only one on the list I'm a regular visitor to. Both do a really admirable job at pointing me to other stuff, and I'm always grateful, but aren't blogs supposed to be a little more... er... personal.

I looked at the others on the list - clearly put together by a person who never reads blogs, and probably works for a newspaper. The dullest selection of semi-corporate (or wanting to be semi-corporate) properties I've ever read. I'll leave Neil Gaiman and Samuel Pepys out as they're kind of niche rather than general, but the others are so dull, and dullest of the lot was the NY Times "Papercuts." Of the others, Maud Newton can at least write (and read) and I might come back, but otherwise, per-lease. Ready Steady Book as shoe-in, I'm afraid, (and I don't really think, with all due respect, that RSB is really a blog, it just has a blog kind of integrated with its other stuff.)

Yeah, I know I write a literary blog, but its not sour grapes, its just, well, is this the best there is? Of course not - its an old-school type of "prize culture" that's very old media itself. Actually, I'm bored with myself now, already. To quote David Eggars, here's a picture of a stapler. 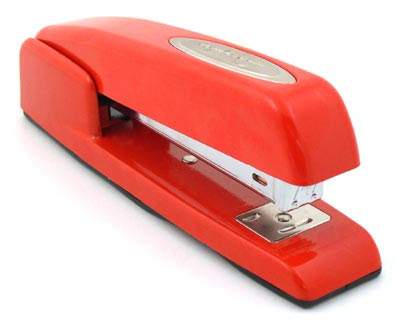 And given that its the first one off the block in Google images, its probably the most staplingist of staplers ever.
Posted by Adrian Slatcher at 2:31 PM

The other categories are somewhat better. Then again, the only one I have any interest in is Australian blogger, and that because Zoe Brain is an old friend of mine.